BRUTE FORCE TC DEMO BY JAMES TAN & THE TEAM 'Brute Force' is a dead project so don't wait for it. This is all we have. One level, one new weapon, one new enemy, a bunch of new tricks and some textures.

After playing the demo you don't regret much the thing that the whole project went away. It shows too little. The new tricks are nice and theme seems to be interesting but there isn't much to play or experience. The only level there is is short & easy. Enemies (terrorists) are deadly when they shoot you but they're coded so that they won't see/hear you when you approach them from behind. This gives you the chance to use one of the new features in the TC demo - you may crack their necks from behind which is effective. This however does more bad than good - the enemies seem to be there just to be sliced & diced by your bare hands or gun - these boneheads offer no challenge.

Another new function is the zoom mode which lets you to zoom your view. It's cool but useless in the demo. However it's still a cool function which may have been useful in the full game. Another new idea is that the doors can be opened by shooting at them. But what's the point? And why would a door open when shot at?

The one and only level in the demo is short & easy. It uses maybe two main textures (new textures aren't that bad really) and its architecture is simple - lots of big halls with tons of crates.

It seems that this demo exist just so that you could crack some poor terrorist necks. If you have a cable connection you might check the demo for its new effects but don't expect much challenge or gameplay. The full game might have been cool with all the new weapons, enemies (hopefully a lot more intelligent) & levels (with all cool new tricks). But it's dead so this is all we have got. 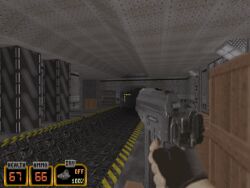 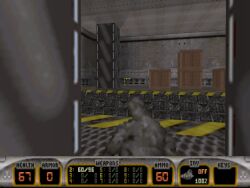