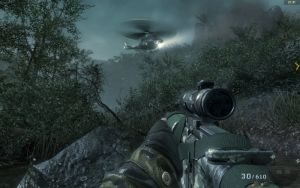 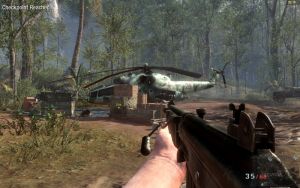 So, is the best-selling game also the best game ever? The Call of Duty series took a dive with its second and fourth parts but picked up with Modern Warfare 2. Black Ops is not a bad addition to the series and features worthy single-player and multiplayer modes.

The single-player campaign is pretty much equal in size to that of the earlier parts. It took me five hours which, once again, turned out to be just perfect as more would have been tiresome and less would have been screwing the consumer. The campaign begins with the player strapped to a chair, being interrogated by a shadowy character. The interrogation forces the player to walk down a memory line, taking him from one location - and year - to another. The maps are a mixed bag from exhausting CoD 2 type maps (such as the first Vietnam map with narrow trenches and infinite monsters respawns) to more varied maps with better pacing. Still, the game succumbs way too often to the old formula of way too much of explosions and gunfire going on, which those ADHD kids might enjoy but I find merely boring (kinda like car chases in films, which put me in a coma).

Like before, the setting is realistic, and this time it's the sixties with its Cold War politics. I get kicks out of references to historical events and characters so in this respect Black Ops works better than the somewhat impersonal WW2-setting CoDs. There are a few cool plot twists near the end and a bunch of interesting characters. Once again, storytelling is cinematic, even more so than before as there's plenty of annoying hand-holding where your contribution to a scene consists of pressing one key. I once purposefully painted a wrong target for a supporting helicopter and voilŕ, the game automatically corrected my mistake! Combine this with the exhausting amount of action going on and you find yourself standing in the middle of gunfire thinking why exactly are you playing this. Things like these, and the fact that the game is essentially a linear, narrow pipe, contribute to a low replay value as I had zero interest playing the game once I was done with it.

But still, the game can be really fun sometimes, like when you're shooting gooks with incendiary shotgun shells, jumping from rooftop to rooftop in Hong Kong while wielding akimbo submachineguns, escaping from a Soviet labor camp, crawling through narrow underground tunnels in Nam or fighting in a biosuit. It's just that the bad moments from repetitive combat to the awful Hind mission tend to stick in your head in equal amounts. 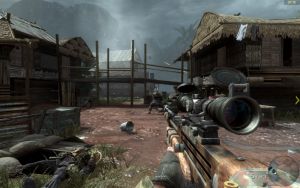 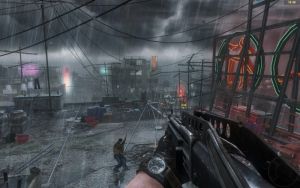 Then there's multiplayer, which in both Modern Warfare titles outdid the single-player campaign. This isn't the case with Black Ops, however, even though many would respectfully disagree. While there were legitimate reasons to complain about the lack of dedicated servers in MW2, the good thing about the situation was that you ended up having a fitting amount of players in a map, which in MW2 tended to be larger than in MW1. This effectively did away with the stupid random combat that so plagued MW1. It's then just too bad that the random factor has gained significance in Black Ops, resulting in more deaths from who knows where, a problem exacerbated by the game's criticized respawn system. The maps are not particularly good either as more often than not I get the "not this one again" feeling upon map load, which wasn't the case with MW2.

The multiplayer mode has a new unlock system, based on earning CoD points in battle which can then be used to purchase unlocks. Some have praised this system but I found it merely irrelevant; I always had lots of "money" to buy whatever I wanted so the system might as well not have been there. You can customize your weapons with all kinds of little things but this is just a bonus; I'm sure some get kicks out of it. The points can also be used for "wager" matches, including Gun Game, One in the Chamber (you've got only one bullet that kills instantly, rewarding you with another bullet), Sticks and Stones (knives, axes and bows only) and Sharpshooter (everyone is given the same random weapon every 45 seconds). These wager modes are good fun in short spells, although too often you end up spending most of your time in warmup rounds which result from the fact that actual rounds don't start until there are six players on the server.

For cooperative games Modern Warfare 2 had the Special Ops mode where you could team up with a friend against computer-controlled enemies in tons of different maps. Black Ops has a zombie mode where Kennedy, McNamara, Nixon and Castro fight together in order to keep zombies at bay. This co-op mode, especially when played with friends, easily beats the game's multiplayer mode and is essentially one third of the package (despite there being only three levels, one of which is an interesting top-down minigame).

Conclusion: I bought the game for its multiplayer mode but found myself disappointed. While it brought back dedicated servers it also brought back problems that had been fixed in Modern Warfare 2. Still, there's plenty of multiplayer content, including a good co-op mode. The single-player campaign is quite good, has a bunch of memorable moments and maps in tons of different settings, but like all CoD games it suffers from a considerable degree of repetition and provides little challenge. 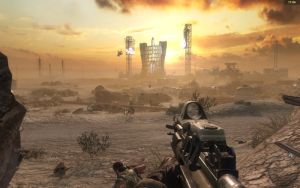 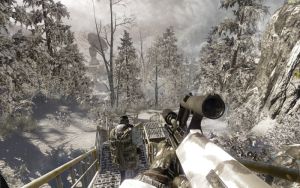 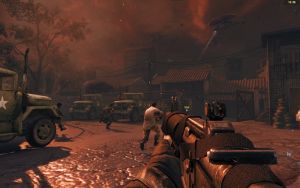 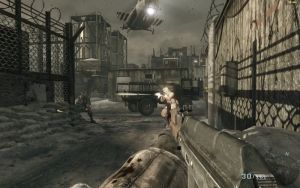