Brothers in Arms: Road to Hill 30

Brothers in Arms combines the strategic elements of Rainbow Six/Ghost Recon and the arcade elements of call of Duty/MoHAA. The game is based on real life events, following a part of the journey of the infamous 101st Airborne Division through Normandy in seventeen levels. 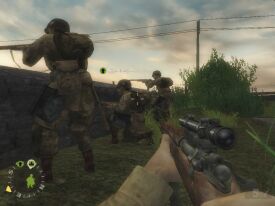 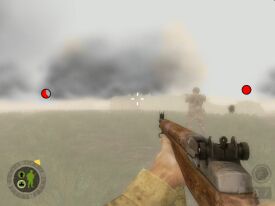 Unlike in Call of Duty there are no health packs, the weapons feel inaccurate (too inaccurate actually), you can't save and you can't take many shots till you die. You're teamed with a squad when you start a map - sometimes a tank joins you along the way. Usually you end up repeating the same pattern - once an enemy squad appears you command your men to provide suppressing fire while you flank the enemy position from the rear (or make your squad flank the enemy). Commanding your troops is rather easy. Sniping enemies from a distance is not an easy task (you're given a sniper rifle only in two maps) so you need to get relatively close. It might sound realistic but in real life there are plenty of things you could use to support the weapon while firing.

The levels are filled with all kinds of tasks but basically it's just about moving your team to the right place and clearing it of Germans. The game is not an easy one - enemy fire should be taken seriously (I played the game on the second skill level) and you really have to think before you act because of the missing "quick save" system. Levels tend to have 1-3 checkpoints where the game saves automatically but sometimes they're poorly placed. This became a problem during the last few maps which seemed to stretch. There are also too many things, bushes, tiny fences etc. that always seem to block your way so that there's only one way to advance. 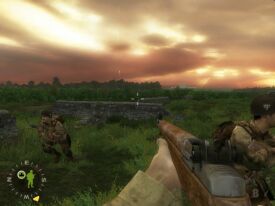 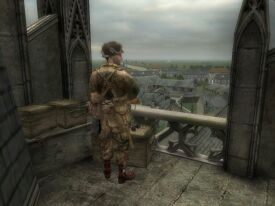 The levels look good although there was a lot less variety than, say, in Call of Duty or MoHAA (for understandable reasons - since the game's based on a slight variation of a real life squad). It's mostly outdoor/village action around the French countryside. The graphics look a lot like those of Call of Duty's and the engine feels the same although while CoD runs on a heavily enhanced Q3A engine BiA uses the Unreal Engine.

The game also has a menu for all kinds of extra stuff. These extras can be unlocked by completing levels - the amount of extras depends on the skill setting you're using. The extras are mostly pictures comparing real life locations with their virtual versions and scans of old mission briefings/reports and so on. Then there's a bunch of photos of the Gearbox team playing with guns (recording sounds, taking pictures etc.) & more. It's a nice little addition.

Conclusion: It's fine that this one didn't turn out to be another WW2 arcade shooter. But the missing save game feature eats away some of the game's atmosphere. The game is hard but not too hard - the hardest parts took me maybe three tries but they were still done in one sitting. Worth buying if you liked Call of Duty and Rainbow Six and wanted to have them both in the same package or if you're interested in the game's reflections of real life history. 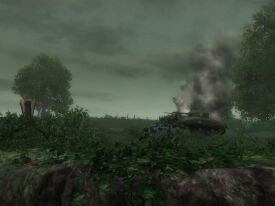 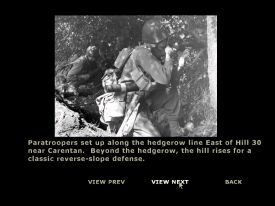