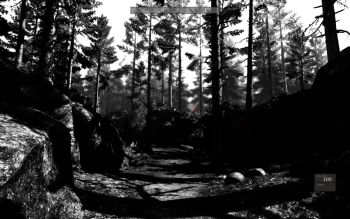 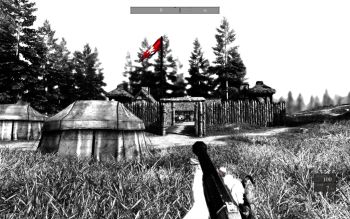 Betrayer is a game by a bunch of former Monolith employees who went on to form Blackpowder Games, an indie group. And that's what got my attention, as these are the guys responsible for FEAR & FEAR 2, in my opinion the best single-player shooters ever (along with Unreal and, naturally, Duke3D). Betrayer starts with the player washed up on the shores of colonial Virginia, marking the beginning of your long and sinister journey inland. You're gonna come across forts, set up by English colonists to fight off indians, and forests - lots of them. You'll quickly gather that at some point prior to your arrival the shit hit the fan as you seem to be the only thing alive out there. Notes and clues left behind by the colonists provide hints of a tragedy that took place, and of the religious dogma that ruled people's everyday lives not long ago. The areas surrounding the forts have conquistadors patrolling them, but these guys seem anything but alive, further contributing to an overarching sense of desolation in the middle of the New World's virgin soil.

The game's approach to pretty much everything is very minimalistic. The graphics are almost exclusively monochrome (black & white). Red is the only color you're gonna come across; it highlights certain enemies, objects and the girl in red, the game's sole friendly character. To be sure, there are options for adjusting colors if you really want to but that's not what the game was designed for. The game's story is told through text. I was a bit surprised to find out only after I had finished the game that the indie developers simply couldn't afford to hire voice actors. I had been under the impression that the lack of voice acting was a design choice, and I cannot imagine the game would have worked better with voice actors; the lack of spoken dialog contributes to the game's eerie, sinister atmosphere. Add music (Betrayer doesn't have that either) and a voicetrack and you're gonna end up with Dear Esther, a commercial HL2 mod that was ruined by its author's inability to realize just when silence is golden. That being said, sounds play a huge role in this game even if there are only a few of them. The "listen" ability tells you where you're supposed to go, objects make a sound when you're nearby and gusts of wind are there to aid you in getting closer to enemies without alerting them. 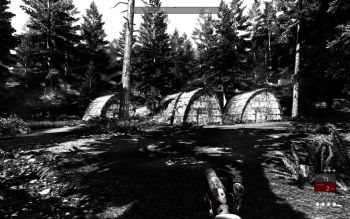 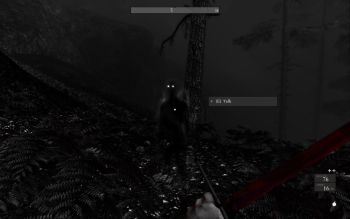 While Betrayer has hit the nail on the head with its atmosphere, its gameplay doesn't quite benefit from minimalism. As soon as you get to the second area (there are eight altogether), the game established a pattern that it's gonna stick with until the very end: Enter an area, find a fort, ring a bell, talk to some ghosts and the girl in red, fetch various items and then talk some more, rinse and repeat. That is all. But the game's distances are never too long and you kinda always want to know what secrets lie ahead. (There's also a fast travel option available which I didn't use until the very last quest that required traveling between rather than within maps.) You're free to travel between the areas but, aside from hunting for optional chests and paper scraps, there rarely is any good reason to do so. Combat too is very simple, consisting of enemies that alternate between standing still & shooting and charging toward you with their melee weapons. However, these guys almost always attack in packs; a poorly prepared player is going to get killed a lot. Automatic weapons were science fiction in the early 17th century so all you're gonna get is some bows and single-shot guns that take forever to reload between shots. This means you're gonna have to plan your tactics in advance when facing larger groups of enemies. And when cornered, it's time to bring out your bombs & tomahawks. While the enemies in Betrayer lack the intelligence of FEAR's replica soldiers, the sparsely situated but violent confrontations did remind me of FEAR in a good way. The game isn't really a sandbox shooter even if the world seems very open, and my nearly complete (in terms of achievements) run of the game took just 9 hours (which is still easily higher than the average shooter length "these days" (the past 20 years, that is)).

Conclusion: After numerous big-bugdet titles, it's refreshing to come across a game that relies on simple things: Trees swaying in the wind, the always comfortable sight of the girl in red in an otherwise dark world, the bit-by-bit opening up of the mystery surrounding the colonists' fate, a simple yet effective ending, etc. The game's monochrome visuals also leave an impression, even if its environments get slightly repetitive (you never step indoors, for example) toward the end. Betrayer doesn't excel in the gameplay department but its story and atmosphere keep you going until you have found out what the hell is going on.