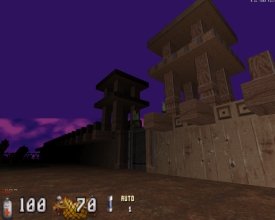 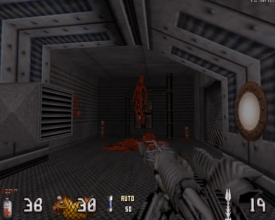 Update note: The shoulder cannon recharge rate has been increased (although it's still quite slow) so the gameplay is now slightly better.

A sequel to LAW's Alien versus Predator, in AvP 2 you get to play one big level as a Predator. Note that this TC is in fact a "Base Pack", meaning it provides a platform for future releases. The pack has plenty of new stuff but only three levels of which one is a short practice map (one long hallway featuring all the enemies), one is a short briefing map and then there's "Race War", the actual mission, a 20-minute map.

This Race War is one amazing ride but with some severe shortcomings. Your mission is to hunt down an out-of-control Predator. Level design is way up there, from good spritework to amazing texturing (there's a big selection of textures from other games all of which fit in well). There's a good balance between confined indoor areas, vents and outdoor areas where an orange sky combined with relatively dark structures provides some amazing visuals. There's quite a bit of tension in the air all the time thanks to well-used music and convincing, crummy locations (the mission takes place in and around a penitentiary). Also, the Predator you're chasing leaves behind marks such as skinned victims.

As a Predator you've got some new toys at your disposal. Unfortunately in just one map your actual selection is a bit limited, and pretty severely. Gameplay suddenly turns from relatively easy to hard once you run out of speargun ammo. Killing humans with your blades is still easy but against aliens you're severely disadvantaged. At this point you're forced to rely on your shoulder cannon but it reloads slowly and misses fast-moving targets easily. Your cloak, which is supposed to make you invisible, is useless because you don't need it against humans and it doesn't work against aliens. On top of this, you cannot attack while cloaked.

Conclusions: This "Base Pack" has a nice collection of new stuff from standard human enemies to a variety of aliens. With just one actual level you get to see only a bit of these being put to use. Race War is an amazing level with a good set up that's also played out well. However, around midway through the map the difficulty level takes a leap which hits the previously balanced gameplay experience pretty hard. Despite this shortcoming, the first (and hopefully not the last) AvP 2 release is an experience you should not miss. 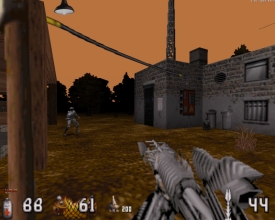 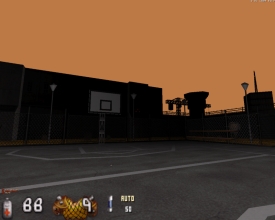