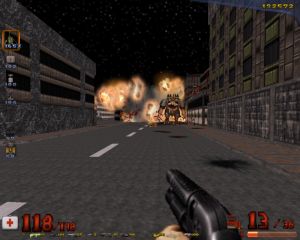 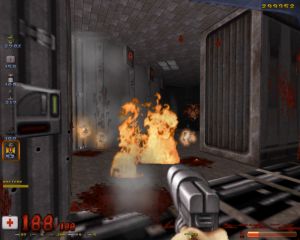 Note: This review concerns version 1.35 of Attrition. The mod has had several significant updates in the past (which is one reason why it took so long to have the mod reviewed here) and will probably have such updates in the future as well so many of the things mentioned in this review may be different by the time you get to play the mod.|

Attrition is the Call of Duty of Duke Nukem 3D. Its "hook" is based on rewarding the player constantly in the form of upgrades, bonuses and powerups. By the time you reach the later levels, the action is non-stop. Attrition is based on a rather simple idea: Have the player play through a bunch of randomly selected usermaps or the original episodes while kills are rewarded with experience points that count toward weapon upgrades of which there are many (from increased damage to faster rate of fire). It's not much different from DeeperThought's previous mod, Weapon of Mass Destruction, except for the fact that it's a bit more "vanilla".

Among the author's stated goals was to give tons of usermaps that have been lying in obscurity for years some more exposure. For this purpose there are five episodes. The first three consist of randomly selected usermaps that keep running until you hit 600 000 points. Since every map is randomly selected from the same pool, having three episodes makes no difference except for the fact that there's a different boss map for each episode.

Getting that 600 000 points is not an easy task. I had to go through 23 maps until I was allowed to continue to the boss map. This is good for those who're unfamiliar with the maps but even they might find the length tedious. As someone who's familiar with every single map in the pack I ended up cursing at too many of them, having wasted all three (too few) of my "skip to the next map" passes a long time ago. The length is of course justified in that it takes a while to get your weapons upgraded but this could be solved with an option that simply doubles the amount of XP received throughout a given episode. The problem now is that your point total is not really dependent on your skill level; everyone will arrive at that 600 000 after pretty much the same number of maps. Another problem is that, since the random maps are drawn from the same pool there's hardly any incentive to start another random episode. (Update: According to the author and contrary to the readme file, the mod keeps track of the maps you have already played so the chances of running into the same map should be small.) 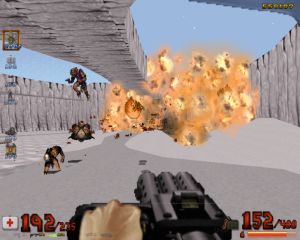 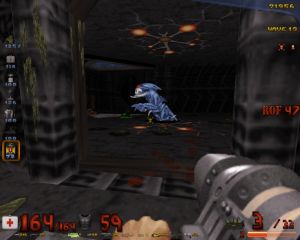 The fourth episode is a "High Score Challenge" episode which is also randomly generated but ends when the player dies (there's no boss map). Since nothing stops you from simply reloading an earlier save, this episode seems rather pointless insofar as challenge is concerned. The fifth and sixth episodes consist of all the original Duke maps. One of the best things about DNWMD was that it provided an excuse to revisit the old maps but with a fresh angle. Attrition does essentially the same. Also, compared to the randomized episodes, at least with the originals you know you're in for mostly medium-size maps.

I found myself enjoying the seventh episode the most. This is the only "War of Attrition" mode episode which is a variation of the typical invasion/onslaught gamemode where enemies attack you in waves and completing a map requires surviving long enough. This episode utilizes relatively open-ended Dukematch maps that suit the needs of the mode. Since hardly anyone plays Dukematch, these maps are even more obscure than single-player usermaps and as such refreshing; the pack does these maps a great service. This is also the most hectic mode. Due to the maps' open-ended nature you're constantly surrounded by enemies and each wave is naturally tougher than the last one. Still, as the enemies get tougher, so do you, which is the whole point. This explains why I managed to survive until the 31st wave which took place in the sixth map (Roch Island). Great fun but at the expense of framerate.

On top of tons of weapon upgrades there are both manual and automatic bonus items. XP multipliers and Rate of Fire bonuses last for a minute but they're activated the moment you pick them up. Sometimes this leads to frustrating situations where enemies are nowhere in sight but the timer is running down. For this reason bonuses such as these work better in the War of Attrition episode.
Then there are items that have to be activated manually. Among these are some very helpful ones. The Holoduke Bot aids you in combat until its energy runs out. The Damage Amplifier, eh, amplifies damage. The Nuke is a powerful item that does major area damage; as such it's useful only in certain situations. However, each Nuke Energy "nugget" gives you only 5% of the total amount required which poses a problem. In previous Attrition versions Nukes were scarcer but each nugget was worth a 100% instead of the current 5%. This ensured that every time you came across a Nuke that you couldn't pick up (they're limited to three) you'd find a way to use one you already have. The incentive to do so in this version is much lower because every Nuke nugget you come across is worth only 5% which is not exactly worth giving up 20 nuggets. Despite this minor annoyance, the Nuke is one of the mod's highlights, which is why it's slightly overrepresented in the screenshots.

Generally speaking, an obvious problem with the mod's concept is the aforementioned fact that, due to your own exprerience level growing, the opposition becomes only nominally stronger as the episode you happen to be playing progresses. In fact, the episodes actually get easier the farther you get. Of course, while some might see this as a serious flaw others would consider it an appropriate reward. It's certainly fun when Duke finally becomes the kind of a killing machine the original Duke would only have dreamed of. Also, the system is very fair. You're stripped of your weapons at the beginning of each map which at first might seem like an unfair thing to do but it's justified and not a problem as every usermap was designed as a standalone with all the weapons you're gonna need to finish them. It's the upgrades that matter and you get to keep them.

Conclusion: With dozens of high-quality usermaps, all the original maps and several Dukematch maps, Attrition is filled with stuff to play. The sense of invincibility you get from growing stronger is a vindication of the weapon upgrade system. There are some significant problems concerning map selection and the scoring system but the diversity of content should ensure that there's something for everyone; if you like action, that is. If not, you're playing the wrong game. 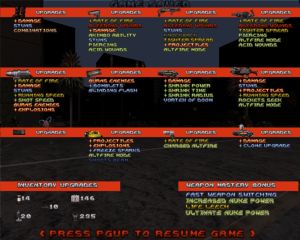 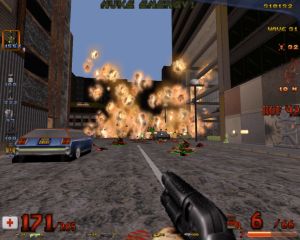