AGE OF EVIL BY FULLY RAMBLOMATIC 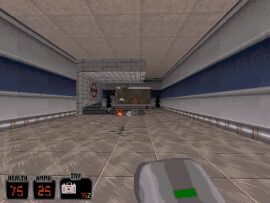 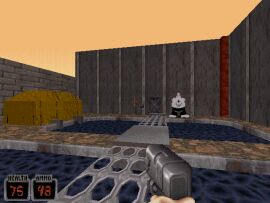 -Levels:
Yap - it has two episodes with fifteen levels (including two secret levels). They're pretty easy and simple. Key hunting and button hunting. What could be more fun? Yes I know - nothing. Design quality is from average to a bit above average. Not much details but still enough to keep the quality relatively high. Lack of shadows bothered me at times - especially in the last level. There are many different locations from graveyards to airports. Levels got a bit boring because of the enemy placement and because every puzzle is the same but there were some very nice levels such as a moving train, a graveyard (with a church), a library (my favorite) and some destroyed building. One forest level was a bit frustrating but other than that - not much to complain.
Score 7/10

-Enemies:
Yeah there are some and they look and sound good even they're a bit cartoony (which is actually a goog thing). Sound effects were pretty well done and new effects were refreshing (although simple). That typical 'first enemy' was a bit overused during the first episode and that big fat machinegun guy was way underused. That 'Poltergeist' creature was neat.
Score 8/10 -Weapons:
Three new weapons. Actually two - the third one will appear in the third episode (d'oh) but you can always cheat if you want to take a look at it. The new 'Automatic Rifle' is a pretty good one but it's just the good old Chaingun with new sounds & models. 'Book of Transformations' is your magical hand which can turn your enemy into a goodie or into a nasty baddie.
Score 7/10 -Other:
Some new textures - mostly signs. Pretty good - nothing to complain. Main character's voice is a brand new one and it's hilarious;)
Score 7˝/10 Lastability: It's fun and pretty good looking but gets boring - Don't overplay:
WWW: http://www.fullyramblomatic.com/games/evil.htm
Download: Fileplanet
Version: 1.5
Author: Fully Ramblomatic
Size: 8Mt
Score: 7 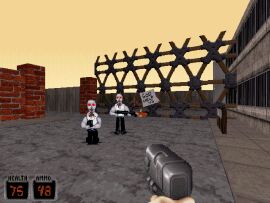 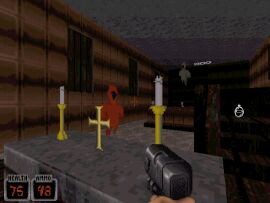