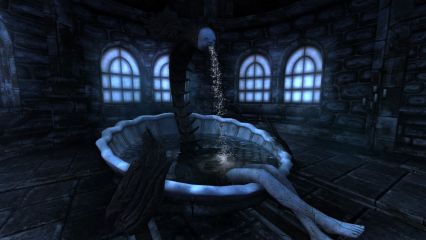 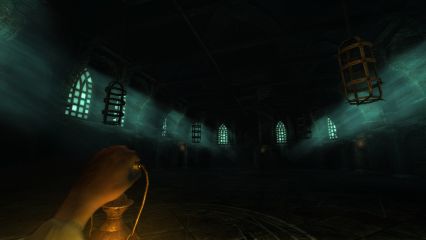 I played SOMA, developed by the same studio as Amnesia, several years ago and liked it quite a bit, even if I found it lacking challenge. While Alien: Isolation was downright exhilarating, SOMA was more about relaxed exploration. The monsters didn't have such a strong presence, and the puzzles were sporadic, so many segments of the game made it feel like a walking simulator (although a highly enjoyable one with incredibly strong atmosphere). Amnesia, on the other hand, is a much more engaging experience gameplay-wise. The very presence of the "sanity" mechanic (you get disoriented when in darkness or looking at monsters) means you have to be constantly involved, even if all that means is merely seeking shelter next to a candle.

Granted, the game is barely more challenging than SOMA was. In SOMA I got hit by a monster once but never died. In Amnesia I got killed twice, and as is tradition with Frictional Games, I was rewarded for that; the monster that got me either got moved elsewhere or despawned entirely, while I was moved closer to where I was going with no lost progress. The developers don't believe in frustrating the player; they rather underestimate him by treating him like a child. This is fundamental to the game's design, and it's also its fundamental mistake. At least the monsters were kinda scary, which is more a testament to the game's brooding atmosphere (and effective use of music) than the monsters themselves, as they're nowhere near the threat that, say, the alien in Alien: Isolation was. In fact, these monsters are rather stupid and easy to fool.

The puzzles are satisfying, including fetching items, combining them, repairing and operating machinery, etc. Some I found a bit unfair, but a few times I also spent a good while looking for something that should've been pretty obvious. When operating doors and switches you move your mouse in a way that mimicks the motion of your in-game hand; I kinda wish this became a standard in 1st-person games, but for some reason it hasn't caught on despite Amnesia being a decade old. 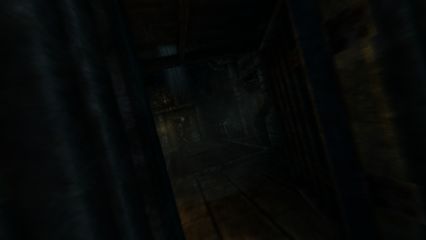 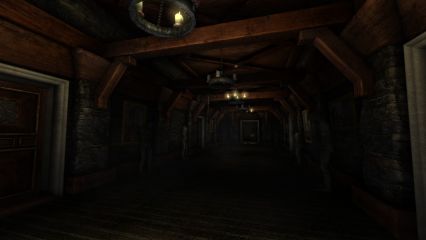 The game has an engaging story that gets darker and bloodier the deeper into the bowels of the castle you descend, and it's an example in environmental storytelling with each location having its own backstory; nothing about the place feels generic and repetitive, everything serves a purpose and has a history behind it. The game also doesn't rely on jumpscares; while there are some, the horror in Amnesia is more "organic". However, I did find some of the narrative elements distracting. Often the player walks into a room, the game slows him down and blurs his vision while there's a voiceover narrating what went on in the room some time ago. Sometimes all this is accompanied by an obnoxious fade-to-white effect that annoyed the hell out of me every time it occurred (and it didn't help that I was playing the game the way it was meant to be played, i.e., in complete darkness). Moreover, it seemed that the further I got the more frequent this became. The antagonist's, a Prussian aristocrat, perfect British accent was also kinda jarring. Why not simply use German, the language of evil? (In fact, the entire Prussia got "cancelled" at the end of WW2 over its perceived evilness.)
As a sidenote, I'm terrible with names and kept waiting for the opportunity to finally meet "Daniel", and I wasn't sure if the flashbacks were from decades ago or recent. I suppose that's on me.

Justine is a short expansion, bundled with the Steam version of the game. It's about psychology, morality and solving three puzzles. Overall, this one falls under the "short but sweet" label, but I've gotta admit I was terrible with the puzzles; in fact, even after googling the solution to the second one, I still don't get it (and it seems that I'm not alone). Only the last "puzzle" was simple enough, being mostly about outrunning a particularly nasty enemy. While I struggled with the other parts, this one was fairly easy, as I went through the entire thing four times (to get all the achievements) and never died, while many seem to have gotten stuck in this part for good. But boy was it terrifying, much more so than any part in the base game. The best thing is that there's no saving; it's not merely to make the DLC more difficult but also to prevent the player from "gaming" his moral choices. If you die (again, never happened to me, but so I heard), the game simply takes you back to your desktop. Those who struggled with the final segment may find this quite frustrating, but replaying the thing from start knowing where to go takes only a few minutes. All in all, one of the best DLC experiences I've had with a high replay value.

Amnesia: A Machine for Pigs 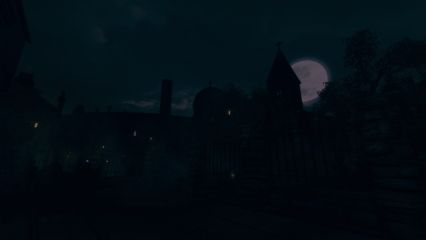 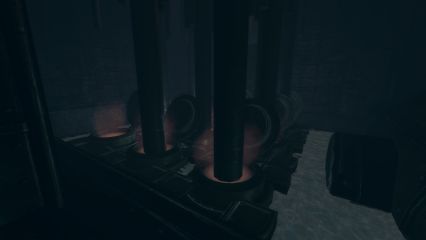 A Machine for Pigs is supposedly a true sequel, but I'd rather see it as an expansion with its 4-hour length, recycled game engine and all. Overall, it's pretty good, but definitely a downgrade from the Dark Descent in every respect. The gameplay is almost fully linear; there are no hubs and you cannot backtrack to previous maps. There are no puzzles to speak of, nothing that'll make you scratch your head. The lantern has infinite fuel and there's no sanity meter; the only reason to ever put down the lantern is when monsters might see it, but they're hardly an issue, appearing only in the second half of the expansion. The first half relies on sights and sounds that may be effective for a while, but quickly you'll realize there's nothing there, just smoke and mirrors. Maybe they felt short encounters would make a bigger impression, but they don't; in fact, it felt the developers (the Chinese Room) were putting monsters in the game against their better (and wrong) judgment and would rather just have made another Dear Esther. (Edit 9.12.2021: It seems I was wrong and it was Frictional Games that wanted to streamline some of the good ideas the Chinese Room had for the game.)

Still, the dark and creepy environments are once again something you'll carry with you for a long time, with Victorian London serving as a backdrop as you traverse into the depths of the antagonist's infernal machine, and the storyline is engaging in all its demented sickness. (You can't, however, compliment the story for originality; it's another one of those where some fed-up intellectual wants to create a utopia and proceeds to slaughter lots of people to get there; you know, like Pol Pot, arguably the most evil man of the 20th century) Also, the game maintains at least a low level of tension throughout, so it's not as easily recognizable as a walking simulator, unlike Dear Esther. Too bad then that they saved the worst for last, as the final ten minutes or so is one of those where you walk in a straight line while the game throws audiovisual elements your way. I struggle to think of a game that'd benefit from this crap, while quite a few have been ruined by it at the most crucial moment.