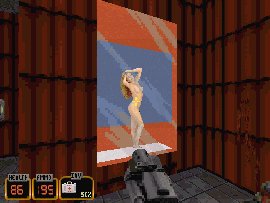 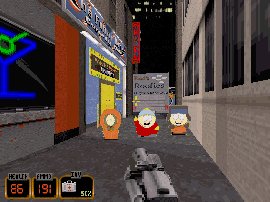 -Levels:
Website promises very well designed levels. Unfortunately this isn't true. Levels are full of bugs,
instead of good puzzles there are mazes (very annoying), Shading isn't there etc. Levels do have a
good theme but results are bad. Only interesting thing in them is 'South Park' which can be founded
often. Some levels has couple nice areas but that isn't much.
Score 6/10

-Enemies:
Only one new enemy and it's somekind of a vampire with a knife. Not much except the art has been
changed (and doesn't look very good).
Score 5/10 -Weapons:
And again only one new weapon which model (idea) is good but graphic isn't. Graphic looks messy
and in fact it's only a new version of chaingun with no extra con changes.
Score 5˝/10 -Other:
Arts are mostly taken from other TCs or Build games like 'Redneck Rampage'. Doens't look very good.
Best thing in this TC is new sounds. In first few levels you can hear gunfire all the time in the
background. It gives a nice feeling. Also some South Park sound effects are cool. Midis sounds good
too. Anyway only sounds doesn't save the TC:( And this TC includes lots of pornographic pictures (nude
girls) so it sells (downloads) a lot with this thing. I hope the new version of this TC will be better
(called 2000 TC).
Score 6˝/10 Lastability: Level themes (ideas) and sounds are good but level design and all others are bad:
WWW:http://www.fileplanet.com/index.asp?section=505
Version: 1.4, 1.5
Author: Curtis Tuckfield
Size: 18Mt
Score: 6 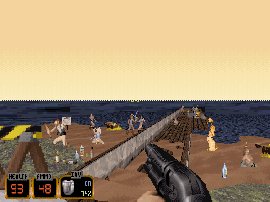 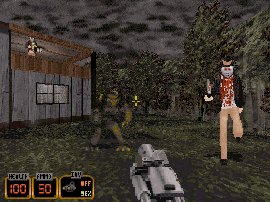