It indeed has been three years since the last time I played Medal of Honor: Allied Assault. And back then I didn't even complete it - I stopped when there were still two maps (small) to go. But anyways I liked it back then and I still like it.

MOH:AA walks between realism and arcade. The environment, the missions, the guns, the foes etc. are realistic but the rest is pretty arcade-based - meaning you can walk, jump, run, shoot without getting exhausted or without losing much accuracy while shooting and that you can take some damage before you die - and there's no way to get wounded. So if you visited the land between Duke Nukem and Operation Flashpoint (or Rainbow Six) you'd find Medal of Honor. 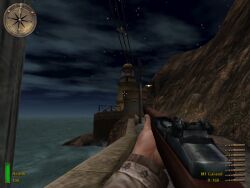 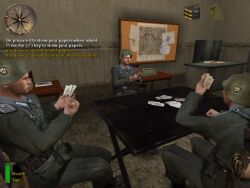 If you find the concept appealing then you won't get disappointed. I did get tired of all those respawns at times but mostly it was pretty damn well balanced. Maybe it'd be nice to run out of ammo even once but that just didn't happen (I played on medium). Also at times the enemies appeared to take a bit too much of damage before dying (although in many cases one headshot is enough). Health is available almost behind every corner although there were many tough battles.

The levels are fantastic. There's enough variety - not just in locations (from Africa to Norway, from France to Germany) but in gameplay too. Jeep rides, stealth missions, great escapes, lots of sniping, tank rides etc. There's plenty of both indoor & outdoor action. Graphics rely on Quake 3 engine which still looks damn good (Call of Duty uses the same engine). The levels are filled with a rich world of sounds. Birds singing, planes flying over your head, gunfire etc. Character & weapon sounds are the best there is (and here the nazis speak German - not English as in RTCW).

One thing I have to put here is that the very last map of the last chapter is frustratingly hard - especially if you start the map with low hp. If you're very lucky you might pass it without even noticing but if you don't - here's a walkthrough I used. It's only about 20-60 seconds but it can get very hard.

Conclusion: Compared to Call of Duty there are very little differences. The gameplay is pretty much the same, the levels feel the same, the graphics look almost the same and so on. My guess is that the main difference is the online mode - however I never played CoD online (MoH:AA is pretty standard deathmatch/team deathmatch). If you like the genre you won't lose anything by having both games (since they should both be pretty cheap today). WW2 FPS fans should not miss this title. 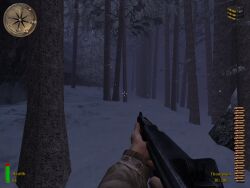 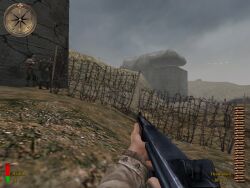