This is a short single-player pack for Half-Life. It has about 15 levels in some different locations. It has some interesting elements which makes it a worth download to each and every Half-Life single-player fan.

First levels are located in some underground facility. Puzzles are quite well done. All puzzles are not just find-a-key-to-open-the-door things but there are also some more innovative puzzles. But nothing too difficult. You'll deal with Xen creatures as well as with the military. Combat is fun and not too difficult. You're also given a fair amount of equipment. Second part is some virtual reality with some good use of different textures & even new enemies. It's a short part but it's very enjoyable. Third part is in Xen which is great. It has some very good looking elements such as this huge chess board & some run-for-your-life puzzles. Xen has never been this fun.

There are some scripted sequences. They are quite simple with nothing spectacular in them but they do bring more depth to the story. There are also lots of messages being sent to you during levels. One of the neatest things in this pack is the use of some new music during scripted sequences. It adds some originality. Ending is great too.

Standard mission-pack with three different locations. Good puzzles & design but first levels are missing something in ambience - scientists? Security-guards? Find out yourself. 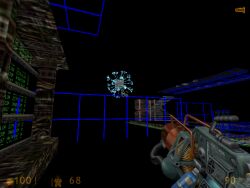 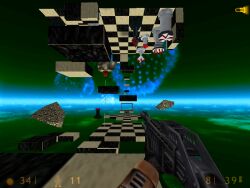