Duke is letting Met-Art, a real-life company specializing in erotic photography and video, use his mansion for a Christmas-themed photoshoot. The aliens somehow get a whiff of what's going on and attempt to capture the babes' reproductive systems for their own devious ends. Naturally, Duke isn't in the business of letting something like that happen.
The premise is there to make the map work as a kind of a sequal to Penthouse Paradise, a classic map featuring lots of topless babes. This also means that there's a lot of full-frontal nudity in the map, the kind of that was oh-so-exciting back in the day but quite tame by today's standards (unless you're one of those sexually depraved conservatives who cannot help themselves sexualizing people, especially children, even when the context is completely innocuous). Still, pixelated 2D sprites or not, any man should find himself stopping every now and then to gaze at the women.
The map itself is pretty good but with plenty of sloppiness around. A lot of the new textures and sprites (including the babes) stick out like a sore thumb. Layout is a bit convoluted with tons of locked doors and sprawling hallways; this is one of those maps where you press a button without having any idea what it does until you come across a newly opened door. There are a few unavoidable falls that compel you to take damage and not one but two 6-button puzzles: It's kind of an unwritten rule that you should not have button puzzles involving more than four buttons unless hints are provided, because trying out 64 different combinations at random is simply not fun by any stretch of imagination.
All that being said, the map is quite fun to play and should take you nearly 30 minutes to finish. Ammo is a bit stingy but the added challenge should be welcomed as a benefit if anything; the player should realize early on not to use shotgun or chaingun ammo on ordinary troopers. There's a fair bit of detailing (including some solid spritework), and lighting is pretty good throughout the map. The release may have missed its intended Christmas release date, but it's still got some nice Christmas atmosphere in it. 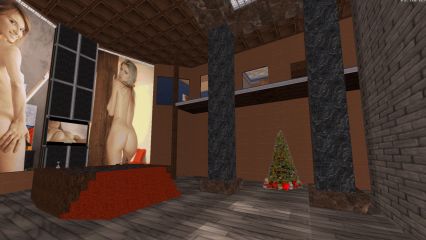