Industrial Factory is the sole finished entry to Alex Pistol's "rookie mapping contest". The rules were that the contestants should have no previous releases, should stick to the original (rather than EDuke32) limits, stay within 500 sectors, use only original assets, and do all this within the confines of the industrial/factory theme. Bonus points were to be awarded for the use of various effects.
So, how good of a noob map the generically-named Industrial Factory is? Well, it's not bad and definitely shows some promise. A few of the areas show attention to detail, lighting is occasionally alright, and texturing, while generic, is pretty good with a lot of consistency and some decent trimming. The map also makes good use of several effects, including the rising-floor effect, the subway, the so-called convex door (that even I have never bothered to put in any of my maps), plenty of cranes (like in E1L4) and even a ladder.
However, the biggest problem is that the author seems to have ran out of time; the map is generously medium-size, while it would have been prudent to settle for a smaller size for your very first map. This is perfectly understandable, for it may be difficult for a noob to estimate the required workload; but one should resist the temptation to add new areas while previous ones are still heavily unfinished. So, you'll come across plenty of full-bright areas (even simple 3D lighting, i.e., giving adjacent walls different shade values, would've done a lot without requiring the use of any additional sectors), areas that lead nowhere, missing sound effects (the map is very silent even though its theme provides plenty of opportunities for ambient sounds), all of which give the impression that the author simply ran out of time and sectors.
The map is still pretty fun to play and strikes a good gameplay balance. Combat is balanced and the player is never forced into an unfair situation, but there's room for more monsters and respawns here. The layout and navigation could be better, but it's still pretty clear where the player is required to go and nothing essential is ever hidden. The big industrial hall with conveyer belts makes good use of cranes, but the layout is a bit confusing here and this could look a lot better had the author had more time to focus on it (especially its lighting).
All in all a fun map that shows some promise in the design department, but it's obvious the size of the thing was too big for the time/sector limit of the contest, and that the author kept adding more areas (consuming scarce sectors) at the expense of details (which are more wall-heavy). 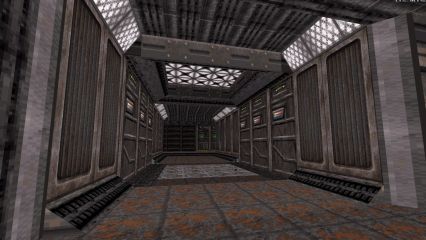