The history of Doom maps converted into Duke3d maps is long and not very successful. The differences between the games are just so fundamental that merely remaking a Doom map in Duke3D and filling it with Duke3D monsters is just not a good idea. Gotcha! illustrates these problems pretty well. The original Doom 2 (arguably the best game in the Doom franchise) map is best known for its epic duel between the Spiderdemon and Cyberdemon. That's where the trouble starts: As you should know, there's no monster infighting in Duke3D. As such, you won't get to witness a duel between an Overlord and Battlelord. Instead, you have to try to make your way to a button while avoiding the Overlord's rockets and the Battlelord's deadly hitscan minigun. Open a door to get out of the battle arena and there are more minibosses waiting for you (to replace an Arch-Vile, arguably the greatest '90s video-game monster). Should you survive this, the rest of the map levels off considerably but ends rather quickly, just like its Doom 2 counterpart.
Another problem relates to the theme. Doom 2 maps are very abstract; you have only a rough idea of where you are based on the sky texture. For example, the Doom 2 Gotcha! took place in a war-torn city, but you never would have guessed this had you not looked up at the sky. What separates Duke3D from Doom is the former's focus on authentic-looking locations. This Duke3D remake tries to balance between the two; there are cool sights of buildings burning in the background, but basically everything else looks abstract. Combined with its selection of rather generic textures, the map looks rather dull, just like most Doom remakes. Again, Doom does not translate well into Duke unless more liberties are taken.
That being said, while the map illustrates the shortcomings of remaking Doom maps in Duke3D, it's still worth playing. It's almost identical to the original both in terms of layout and detailing, so this is a great opportunity to form your own opinion on the subject. 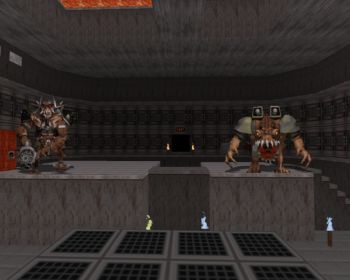