Duke has to go somewhere and do something there; the description is in Spanish so I can only guess what Duke is supposed to do, but it's probably the usual deal involving killing aliens. The map is a worthy effort, although very rough around the edges. There's a fair bit of detailing and trimwork, but it's so heavily influenced by the likes of Alejandro Glavic that it often seems copypasted. The layout is another problem, consisting of a series of relatively narrow rooms and corridors where you progress linearly, backtracking occasionally. Its layout is therefore more like Wolf3D and less like Duke3D. Gameplay is pretty well balanced with a good monster-item ratio (but often you wish there was more room to move around) and there are signs above doors to indicate which door a given button opens. The map wraps up with a destruction sequence that's pretty well done but slightly confusing because you're given instructions in Spanish. 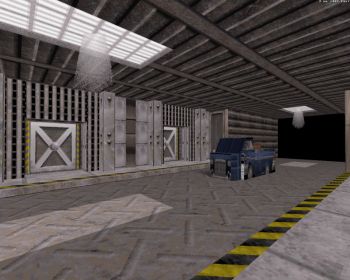