The author, who also used to have a Duke3D usermap site a long time ago, passed away recently so this is the Community's way of immortalizing the author's spirit. Alexei-Caribbean makes an attempt to mix two themes by linking Moscow with a Caribbean beach resort via a secret subway system. The map itself is rather noobish with oversized objects, doom doors acting as swing doors, weird texturing and some irritating mortar traps. The second (Caribbean) half is a bit better and there's a nice contrast between the intentionally ugly Moscow subway and the sunnier beach resort. There's quite a bit of aliens, nearly 200 in fact, and the map should take you at least 15 minutes. The map's gameplay is balanced and the player is given better weapons as soon as tougher opponents start showing up but overall the map relies too much on locked doors and switch hunting. If your time is short, you're probably gonna find better things to do than playing this map, but if not, give it a try. 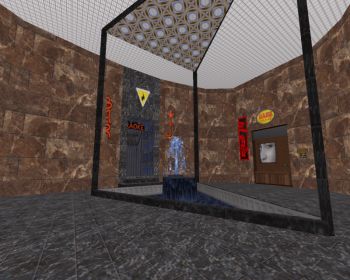