Who needs a new game when you can always download a new single-player mod for Half-Life?

Hour-Glass is a time travel adventure where you - once again - play the role of Gordon Freeman. During this adventure you'll learn more about Gordon's family & its past.

Locations vary a lot. You start from a city with nice looking streets & night club (this location has lots of adult material so keep your kids off the screen - just kidding - it's only good for the kids). As a Duke3D player you'll recognize the music that plays on the background. It's from our loved Duke3D game. Hour-Glass has some other sounds from DN3D as well. Anyways after that street scene you'll start travelling through time & space. You'll visit Coca Cola factory, moonbase, Mars, some galaxy etc. Levels have been influenced a lot by Quake 2 levels. There are lots of puzzles & traveling between levels. Design is very impressive at times. Levels are also well detailed. There are some beautiful sceneries out there so keep your eyes open.

Combat is good. Almost every enemy that you'll face is a grunt. So no Xen creatures this time. Oh well - you'll encounter some monsters at Moon. The thing that really started pissing me off were those invisible army guys in the last levels. It's hard to hit them when you don't know where they are. Sure you can try to see their location by following bullets but you'll take some damage before you can kill any.

There are some scripted sequences (well of course). They'll do the job so the storyline flows well but there was nothing spectacular in them. But I don't complain. Storyline was good too.

Hour-Glass is a single-player pack for Half-Life which has lots of new things & locations. However it doesn't reach the level of previously reviewed 'Sweet HL' & 'Nuclear Winter'. It might be partly because of those annoying invisible enemies or the lack of 'Oh my God' scenes. But this is a professional quality pack which you'll enjoy. So get it now if you have Half-Life (don't tell me you don't) my dear Duker. 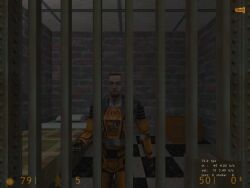 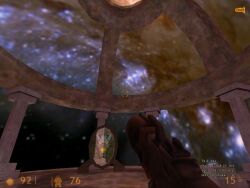