William Gee is mostly known from his dukematch levels (Labrenth 2, WW2) but he has also released some good single-player levels (Doom remake WGDoom1, Alienx). With this level William takes a major step forward. Design is similar to Bobsp levels and it also has some style from original Duke levels & his own level 'Alienx'. It feels like some level from 'Lunar Apocalypse' but it's a lot more detailed. Design is just very impressive with many different styles. Level has lots of cyclers & blinking lights. Some sectors are red, some blue, some dark, some bright. Use of colors is excellent. Spritework is fantastic as well with huge bridges built using sprites. Use of ambient sounds is amazing as well. Sounds are playing all the time on the background giving more interactive feel to the level. Some doors look fantastic & complex. Beginning is similar to E2L2 but it's a lot more beautiful. One very incredible thing is the size of this level. It's quite large even it's filled with details. You might remember that Bobsp levels were very small & full of details. Well William here proved that you can create large & fun levels with as much details. There are lots of normal & respawning enemies from Liztroops to Battlelords. You're given a fair amount of weapons. Actually the balance is just great. Perhaps there was a bit too much of Portable Medkits. But in any case - William Gee's space level is one of the best Duke levels ever made. 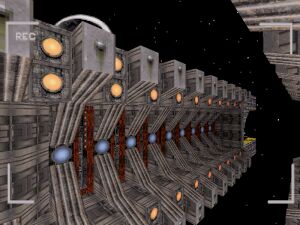