Description: Another huge space level from William Gee - This time for Atomic Edition.

Design: I'm sure you have learned to expect quality stuff from Gee and surely he won't fail this time. The alien base/space station is full of details, lights, effects and action. The size of this level is impressive. So many details in such a big level. Style is organic alien hive with computers, monitors and other non-organic stuff. There are curved surfaces with brilliant lightning effects. The base looks impressive and huge from the outside. Windows are common so you will be wondering a lot of its beauty.

Textures: This one uses typical hive textures from levels like E2L4 & E4L10. They're well combined and mixed. There's quite a lot of variety and texturing is rich. What got my attention were those doors which were not just highly detailed but well textured as well.

Gameplay: You're going to enjoy playing this one. There are tons of Battlelords, Protector Drones, Commanders etc. Like always William's levels are full of enemies. You're given just enough ammunitions & health to survive. Gameplay is not difficult but challenging (you can't just go around shooting). You'll also travel long distances but it doesn't matter since you'll have a lot of time to look at the surroundings.

Innovations: Gee has his own style which is very similar to original Lunar Apocalypse levels (see Gee's previous WGSpace levels) - just with a lot more details than in the originals. However there's still a lot of things and design ideas you wouldn't see elsewhere. The ending is neat but not never-before-seen (although used maybe only twice before this one). 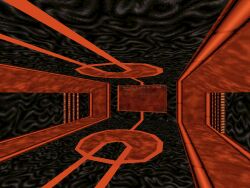 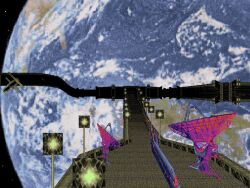