Description: Dark city level from Ale whose levels have impressed the community since his first level got out. This was originally meant to be in Grins of Divinity Episode 2 but the project got abandoned (a TC got abandoned? The first time I have heard of such thing). Luckily Ale rescued his level from that deep grave and now MSDN offers it to you.

Design: Fantastic, brilliant, clean etc. Nothing very original but still a very highly detailed level with fantastic details and spritework. This level - like Ale's all levels - has tons of nice little things made of sprites and a whole construction site (a building) made of sprites. And then there are some stupid invisible walls.

Textures: Uses some new textures from GoD. They're pretty good - almost as good as Duke's original. They work very well and give a nice touch of originality to the level. Look is quite dark and everything seems to be abandoned or something like that. Trimwork is perfect.

Gameplay: It might be Bob who invented details and tons of new texture combinations but it was Ale who invented the perfect balance between details & lenght. Monster/weapon balance is just perfect and this level keeps pumping monsters in front of you. There are three keys and some buttons. This is quite a medium size level. There are a few nice explosions - you might miss the first one because you're being shot at.

Innovations: 'GoD storyline' is present but not much. However it manages to give this level something. There's a freezing chamber in the beginning with an email message on a computer screen. Pretty nice. Some statues have been inserted around the level which support the storyline. The construction site isn't a new invention (used in 'Bombed LA' for example - in smaller scale of course) but still quite original thing.

Conclusion: It's a new map from Ale so get it now. 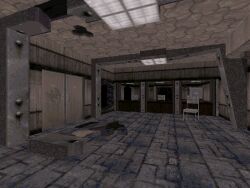 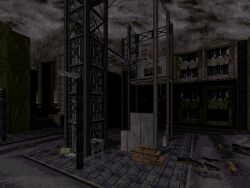