Description: Duke's favorite bank is under alien attack. Standard city map with a bank and a subway.

Design: Despite a few areas, especially the first street area (too big for the amount of details it holds), the map looks rather good. Lightning deserves a lot of the praise (although some areas seemed to had no light sources and at least one stairway seemed overly bright). The inside of the bank had a bit cramped design with tight corridors and so on. The subway and the vault area seemed a bit better in this respect.

Textures: Not bad but could have used a bit more trimming and aligning. There's quite a lot of variety and the red dusk sky never fails.

Gameplay: My advice to you is to look for secret places. Otherwise, you're going to face ammo issues. Once you get yer hands on those weapons the gameplay turns for the better with a good number of enemies after you. However, tight corridors are not fun when you're supposed to fight.

Conclusion: Like "Deep Sea Rising", this one too had a bit cramped design and maybe a bit rushed texturing. I advice the author to spend a bit more time polishing his levels (the level took only a week or two according to the readme). 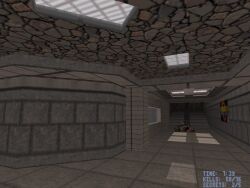 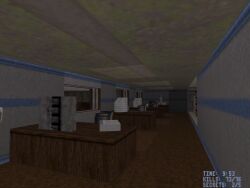