Description: All hell broke loose when Quakis released a new single-player level for Duke3D. The last time you heard of the guy was last summer when he released "EDF Overtaken" and since that he started numerous projects of which most got abandoned. This one's pretty standard hi-tech facility level with well balanced gameplay & lots of eye candy.

Design: Design is pretty standard with lots of eyecandy. You won't find anything original - it's pretty much all Bobsp style from the beginning to the end - But who cares as long as it's used often and well? There are neither revolutionary ideas nor structures - that's why none of the locations rise above the others - they're all equally good. The level has one bigger outdoor area where you have to explore some canyons - the nature surrounding you looks very good with sloped canyons (the way it should ALWAYS be - most people just make flat walls) & well placed trees.

Textures: Textures are very well picked as they were already in Quakis' previous release. Trimwork is very good with lots of textures mixed together. A few places could have used a bit more work like the first outdoor brick wall in the beginning.

Gameplay: The gameplay is as well pretty standard with very typical button/key puzzles. Combats are pretty good since you're given enough ammo & health. In the end I ran out of health due to lack of it and since there were a few tough fights but that's how it's supposed to be when you get closer to the end of the level. A few places felt a bit too cramped - such as the smallish hallways in the beginning with a Liztroop behind every corner. Also one explosion was placed in a bit too nasty location since you can't avoid getting hit by it.

Conclusion: Lots of details, impressive texturing, good gameplay - the way we want it. We want less talk and more releases like this Quakis! 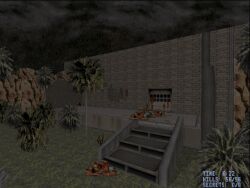 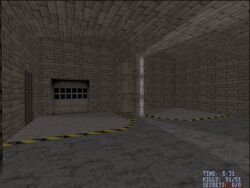