Description: Steambull's first map and hopefully not his last. This is a very good potential opener for a glorious career in "The Duke Industry" (as the community folks know it). It's a research facility somehwere in the middle of nowhere.

Design: The theme is already appealing with nice outdoor terrains and colors connected to well built hi-tech parts filled with details and decent (but not overly complex) spritework. Lightning is present and there are very little if any bugs. My only complaint concerns those rocks which surround the outdoor areas - they're too boxy. A few slopes would have helped it a lot.

Textures: The green/brown/red outdoor colors are quite often used in other levels and you never get tired of them. Texturing is quite rich with a bunch of good combinations and decent trimwork. Mostly it's a mix of "happy" colors which is a good thing after all those "brown & messy" colors we have gotten used to.

Gameplay: Skill settings have been implemented and they have a strong effect on the gameplay. When playing on s2 things get a bit tough at times and near the end you're constantly out of ammo. There were a few locations which were too cramped and contained a bit too many enemies. But if you want it the easy way then go with s1.

Innovations: There's this "puzzle" where you have to send a bomb through a mail line in order to destroy a door but it has been done before in a bit different way (at least twice - although I can't remember the names). It's still a neat effect.

Conclusion: Fun for 10-15 mins. Well designed and supports skill settings. The new midi is a killer. 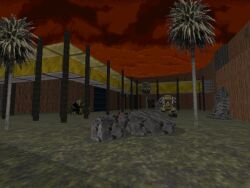 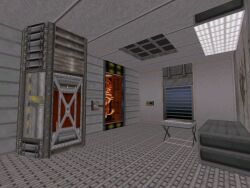