04.21.2017 Note: A new version of the map (see the second download link above) was released in early 2017. The version is pretty similar to the original but takes full advantage of Polymer lighting. The map actually benefits quite noticeably from this due to its dark/scary theme. There's also a new flashlight effect that actually resembles a flashlight.

Description: A sequel to The Dream, which was a city map with some neat new ideas and spooky sequences. The Dream 2 takes place in a remote location with villages, forests and mines.

Review: As a spooky map The Dream 2 works pretty well. There are many scripted sequences, some of which are actually scary (although briefly - you never get that "Something bad is going to happen" kind of terrifying feeling you might get in Doom 3 or even FEAR). An often repeated sequence is a strange, shadowy person appearing behind windows when you enter a house. Sounds (most of them new) have also been used efficiently to increase spookiness.

The level looks pretty good with some good details all around but lighting is a major problem. Areas such as the mines and several of the houses are the kind of locations that could effectively boost atmosphere if given proper lighting but here they stand out as just overly lit locations. One area of the map, a small dock, is so bright that you might as well be staring directly at the Sun. The sky as well as some of the surroundings are pitch black which works pretty well: I cannot imagine a starry night sky fitting better. There are some design flaws such as invisible walls.

Once again Eddy has included a bunch of "new" hacks (they tend to be pretty recycled at this point) which are pretty good although nothing outstanding. The new flashlight turned out to be pretty useless, if not a burden. Gameplay is a bit tedious since you get to face only one type of enemy, a dark Octabrain, and you only get one weapon, the shotgun. After a few minutes things start to get pretty repetitive.

Conclusion: The Dream 2 is ambitious in that it introduces a bunch of new hacks, sounds and the kind of gameplay you don't see too often but it falls short of its target - a scary joy ride through the countryside - due to repetitive gameplay and lack of atmospheric lighting. 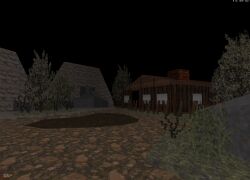 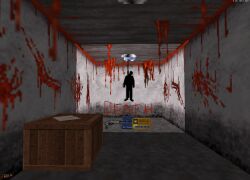