The Review: One morning Duke wakes up a few centuries in the future, in what appears to be Korben Dallas's apartment (which is strangely fitting actually). It seems that Duke's universe has merged with that of The Fifth Element, one of my all-time favorite sci-fi movies. As a fan of the movie there are many things to love about this map. High-quality vehicle models from the movie have been brought in with just a tiny bit of con coding to give them – and the surrounding city – life. There is an amazingly fitting skybox from a rather lame and largely forgotten Judge Dredd game and a whole bunch of other "new" stuff from graphics to sounds. The map's New York of the future feels vibrant and alive, just like the movie's refreshing vision of tomorrow. But it's not all sunny and vibrant; the map's second half consists of dimly lit lower sections of the city, which provides a nice contrast with the preceding sections. There's a bit of sloppiness to go around, however. The new models have issues with collision detection, some sounds are missing and invisible walls tend to be a bit too obvious. The map's indoor sections rely too much on uniform lighting, which is a pity in a map that's otherwise detailed and architecturally ambitious. Moreover, for a city that's so visibly alive, things did "sound" awfully quiet most of the time. The packaging method could also have been more efficient, and if you're playing this on AMD hardware, prepare for noticeably sluggish framerates.

Conclusion: The map may leave a slightly rushed aftertaste, but playing it was definitely among the most refreshing experiences I have had with this game recently. At its core The 4 Elements may be your typical Duke usermap involving killing aliens and going after keys, but at least its got style, just like the movie it seeks to imitate. A sequel featuring the New York spaceport and Fhloston Paradise would be most welcome! 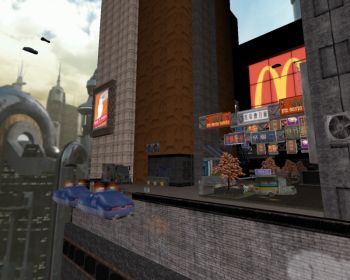 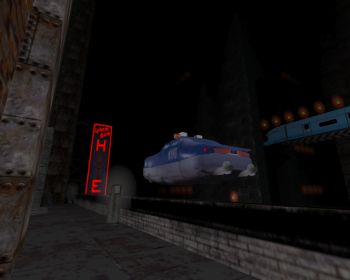