Description: The second "2-hour CBP", a community project where every participating mapper was given two hours to build. The result is this, a snowy city infested with aliens.

Into it: Before you go "yet another CBP" let me just say right away that this one is one of the best, if not the best CBP right after DPCBP. Like CBPs 5, 6 and 7, Suburban Hive also has a consistent theme and, exluding maybe one or two areas, it's hard to distinguish between parts built by different mappers. (My part stands out though as it is clearly superior.)

The "consistent theme" I mentioned is a mix of organic and non-organic alien hive and city themes. The suburb in the map has been taken over by aliens who're apparently turning the entire locale into a hive. There are also these weird crystal-like structures that reach for the skies in some of the street sections. Overall the map has a very dark look with plenty of shades of brown, green and grey.

Gameplay has been implemented with skill. Because of the decentralized mapping process, there's quite a bit of backtracking but respawns play a crucial role in providing action at every turn but so that it doesn't get overblown. My only complaint is the huge amount of eggs in a few of the level's locations and this is because at least I'm compelled to kill all bad guys who step on my way, of course assuming I'm well-equipped to deal with them. A Queen fight wraps it up in a most fitting way, at the heart of the alien hive.

Conclusion: At nearly 30 minutes in gameplay length, Suburban Hive is one of the biggest CBPs. Each mapper was given only two hours to build his part but despite this the result is a compact map that might as well have been built by one person. The map is also unique in that there are only a few levels with alien infestation as a theme. 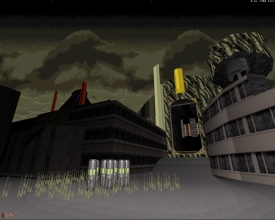 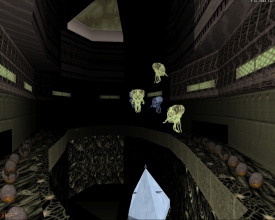