The review: It's always a pleasure, especially so many years into the life of Duke3D, to come across a map that tries to do things differently. Slum Noir doesn't have innnovative gameplay or anything like that but its take on the darkest streets of LA is refreshing. The textures you come across are usually found from crummy space stations or abandoned hi-tech bases but they work so well in this map that you don't even miss the typical city texture set. Not that the slums of Slum Noir resemble anything you'd expect to find from today's LA; rather, these streets are from the near future with some obvious cyberpunk influences. It's not perfect though; the author's vision suffers a bit when you get indoors where your surroundings often look simply uninspiring (apart from a short night club visit) with repetitive texturing and dull lighting. For the most part the map's gameplay flows smoothly from one section to another. The layout feels interconnected but still linear; you aren't gonna come across any optional routes. Effects such as traps and ambushes have been put into good use even if I once got a bit lost due to having missed an invisible trigger. The map is not very long; it took me around 13 minutes on the first playthrough but there are over ten secrets in case you want to explore the map a bit further. 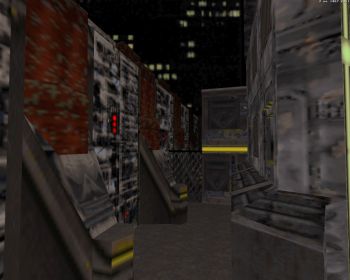 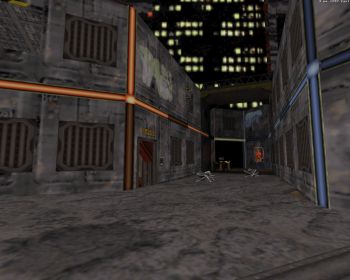