The Review: Slick Willy is William Gee's attempt to cash in on the DNF2001 leak, featuring the eponymous strip club from the game. Now, this isn't a remake or anything like that, merely the author's interpretation of the place. Like all recent maps from the author, this one too makes heavy use of the true-room-over-room effect. Most casual players of Duke3D maps probably won't notice any difference, but oldskoolers like myself cannot help but be stunned whenever they see stuff like the multi-story building in this map. There are plenty of new textures that fit in perfectly, giving the place a classy look; it's not all sleaze, as half of the club seems more like a place for the rich & powerful to hang out in and talk business. New paintings and neon signs decorate the walls and exteriors; their use is extensive, but never out of place. Combat-wise Slick Willy initially felt less spammy than some of the author's other maps, but even here there just had to be several bigger battles toward the end. Big open areas with tons of aliens (including Battlelords) shooting at you just isn't my cup of tea - not that it's difficult; my brain just wants to switch off - but the author seems to like them, so what can you do. (It's not much better indoors where several Battlelords and Commanders decided to pop in in the map's final moments.) With respect to navigation, there's some potential to get lost. This is because the layout lacks a recognizable center; the map is all about rooms and corridors spread over several buildings housing several floors. Sometimes there are several ways to reach your objective, which is a definite plus and increases the map's replay value. You should quickly learn to interact with paintings and computer panels as they're rather vital to progression (as is paying attention to viewscreens). The outdoor areas were too dark for my taste; maybe it's to make the nice-looking Milky Way skybox seem more pronounced, but this surely isn't a map you want to play in the middle of the day.

Conclusion: A well-designed map that gets plenty of mileage out of its new textures and TROR effects. Gameplay is more of a mixed bag, but many may enjoy the aspects I found less enjoyable. 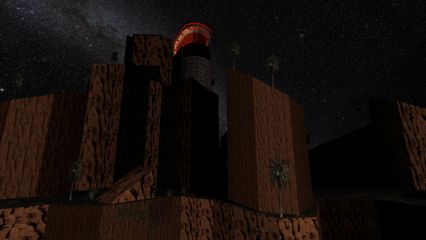 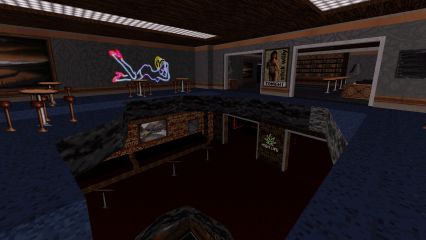