The Review: C3PO is a legendary name from the days of the "old" (i.e., pre-AMC) community; he designed classics such as Holiday Holocaust and Leaving LA, not to mention the best maps for the Starship Troopers TC. Not only that, but his beige texturing and 3DR-type shading had a huge influence on me as I was trying to make the transition from designing bad maps to designing maps that didn't suck quite as much. It was not a big surprise then that he went on to work on commercial games and, in the meanwhile, even managed to finish Mission Improbable, one of the best Half-Life 2 single-player mods out there.
Shocking Twist is pure C3PO; it's as if the man had been kept in stasis for twenty years, awoken now only to design this map. The texturing and shading owe a lot to the original maps, especially Levelord's work on Shrapnel City: in fact, the main street area instantly reminded me of Sewer, one of the two single-player maps that were left out of the base game (the other being Sweeney). The resulting C3PO style with its heavy use of "creamy brown" colors, "sophisticated" trimwork and modest approach to intricate details is the wellspring of many maps you see today, including, as mentioned, my own. This map provides a lesson in efficiency, the art of making a room look good and polished while employing only a modest number of sectors and walls.
The map's layout and gameplay are as expected: interconnected, easy to navigate and centered around keys and buttons. It has a pleasant flow to it and lots of verticality, taking you from rooftops to dimly-lit maintenance tunnels. The center of the map is a platform (a "sidewalk on demand" in the map's "lore") you need to raise in order to reach higher levels, a nifty little innovation that spices up the otherwise rather orthodox gameplay. As a small complaint I might mention that Shocking Twist plays it safe with enemies; they are there for entertainment rather than challenge. Interestingly, the map uses Doom3-like "monster closets" instead of traditional respawns, which I found a refreshing way to bring in additional enemies.

Conclusion: Shocking Twist demonstrates that what worked in a Duke3D map 20 years ago still does. It may not have the bells and whistles of a modern EDuke32 map, but you simply cannot go wrong C3PO. 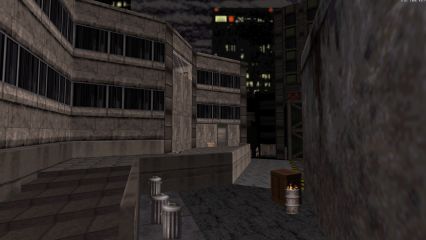 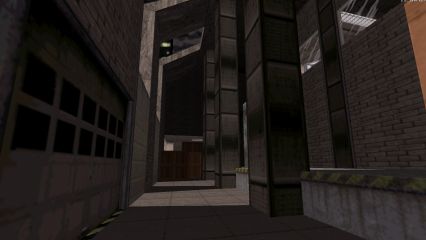