Description: This is the fourth part of 'New York Rebellion' episode. Previous parts have been released at DN-R and this one seems to be the most popular one. It's a 'Sewer' style sewer.

Design: If you have played Levelord's "Sewer" (a Duke3D left-out map - don't try to read its review since I wrote that one about four years ago or something) you know pretty much what to expect. 'Sewer Confines' borrows a bunch of ideas from that (although I could be wrong) but has its own ones as well. Design is mostly good - it's not overdetailed but more close to original Duke3D maps. Lightning is very well executed and it's a pleasure to look at.

Textures: Nothing extraordinary here. Simple and well balanced use of textures - works pretty well with its original Duke3D-type lightning & style. There were a few places which should've been trimmed better.

Gameplay: You just might run badly out of ammo if you try this on medium skill level - That's what happened to me but it turned better once I reached the shotgun. There are no portable medkits and I couldn't find any Atomic Healths so it might get a bit challenging - so if you're the kind of guy who wants to do things the easy way then play it on Piece of Cake. Fun and pretty well balanced gameplay - excluding the pistol/kick combats in the beginning (assuming you're like me - you just have to kill them all so that no one else has to do it). 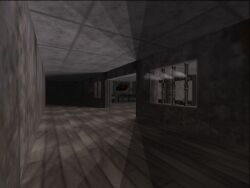