Description: An interesting space level where your mission is to locate somekind of a space shuttle and enter it. Note: Might work on 1.3d - there's only one texture from Atomic Edition. However there's also a big chance that this prevents the level from working.

Design: First two/three rooms are ugly but the rest of the level looks incredible. The shuttle itself looks impressive - both inside the shuttle & outside of it. The way you travel below it and finally enter it and its sub levels is worked out well. The shuttle also takes off which is a familiar effect if you have played a classic called V5. Sound effects are also well placed around the shuttle.

Textures: The shuttle itself is all around white and what had me were those doors which were textured pretty well. Rest of the level is quite typically textured but you can still definitely recognize Reginukem's style (if you're familiar with his style).

Gameplay: Very good. Mostly because the design is so well mixed with an interesting theme. There are enough monsters from Lizmen to Commanders. Weapons are balanced so that you'll have to use more or less all of them.

Innovations: The way the shuttle takes off is not used very often but it's not a new thing either. However it looks very good. I also loved the way you can lower the floor of the command center and enter it.

Conclusion: A very nice surprise from Reginukem. Something familiar, something new and definitely made by Reginukem. Don't forget his previous 'Urban Reclamation' for a different city experience. 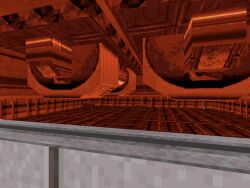 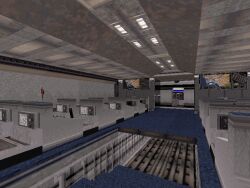