Description: The name should leave no one wondering what this map is all about. The map joins a long list of school-themed maps and is one of the biggest in this category.

Into it: A quick look at the map demonstrated a glaring flaw; lack of lighting. I then immediately assumed the map to drop below the Hot Map line but a full playthrough convinced me to treat it as a "hottie". The problem with lighting is that there's a uniform light level everywhere (well, almost) and neither sector nor wall shading. Other than that, design is slightly above average with good spritework and a moderate amount of details. Only the repetitive hallways and stale outdoor areas left me disappointed. What really makes the map work are the dozens of classrooms with tons of nice little ideas and jokes. The map doesn't fall into repeating the same classroom design from one room to another but instead treats the player with a comprehensive school building with plenty of variety. You're always curious about what the next room might hold and the author has thrown in plenty of good jokes as well. For example, a dull-looking faculty room turns into a strip club in the blink of an eye.

The map has a good flow and the layout is simple enough to make it easy to navigate. The school is big and has tons of locations but paths to following sections are locked until enough buttons have been found. Gameplay is quite standard but progresses nicely from easy fights to some big ones near the end. A good selection of weapons ensures that you shouldn't run out of bullets but you cannot rely on one weapon all the time. Secrets come in handy although I only found two out of six. Still, I managed to complete the level in 40 minutes without dying.

Conclusion: School is a very even map in that it doesn't really diverge from the theme and gameplay is establishes during its first few minutes. As such, it's fun to play throughout but in terms of feel and pacing School is like a pre-Quake 2 era map. 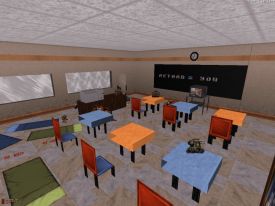 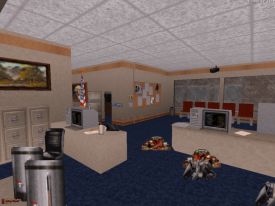