Description: Zaxtor is back with another level. This one continues the journey which began in Zaxtor's previous Arc_Nova Base. It's a huge alien base level with tons of puzzles and some new innovations.

Design: This one shares something with Arc_Nova Base - The outside area looks brilliant. It's the surface of the alien planet with all kinds of strange structures and organic stuff. Believe me - you'll love it. However the surface could be less flat. Indoor design is mostly good - not always filled with details but with interesting locations. There are sprite tunnels with invisible walls (floating), moving walls, a maze with eggs etc. However the level could look more organic. Now its walls, ceilings etc. are too square - What should be organic is now too boxy. Doors could also show some more variety and there should be a lot more ambient sounds. Shadows were there at times and looked good but still the level could use a lot more of them. This level reminded me a lot of 'The Mother Base' level in Chimera TC (the best alien-base level ever designed with brilliant design, massive size and tons of new suberp textures).

Textures: Texturing is better than it was in Arc_Nova Base. Textures fit well with the theme and they're well aligned.

Gameplay: Gameplay has its positive & negative moments. Jumping from one eye to another is okay as well as that maze with buttons but don't force me ever again to face that first 'face boss'. The idea was cool and it works pretty well the second time but the first 'face boss' is just too annoying. Fellow blood vein in my head almost popped out while trying to shoot into that hole with a shotgun while those turrest were firing at me (and you can't even destroy them). There was also this hallway with about three PigCop tanks which could be a bit difficult if you have ran out of health. There was also this puzzle with some freezer turret which was pretty easy but took some time and felt a bit annoying - But I still consider it a positive new innovation.

Innovations: Yap - Once again Zaxtor introduces us some new effects. You'll be hanging from human eyes, fighting against a deadly freezer turret and you'll face two new 'face bosses' (ever played Doom 2?). All of these have both positive & negative issues.

Conclusion: It's massive, it looks good, it has interesting locations and some new effects. Try it and feel free to add a few points more when you have developed a method which gives you the ability to remove that first 'face boss' scene from your memory. 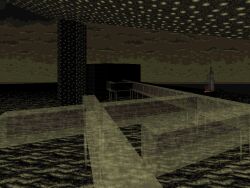 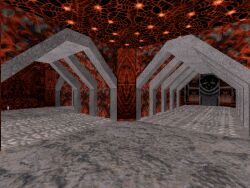