Gameplay: This map is huge. I consider myself a pretty fast player but RCBP 2 took me fourty minutes! What's best is that the map flows smoothly from start to finish - an average player shouldn't get stuck in any of the map's puzzles. I'd have added more ammo since I was running on empty a couple of times and I'm a pretty good player: a not so good player may find the map difficult. The level benefits from various enhancements which are mostly recycled from Zykov Eddy's (one participant in this CBP) previous projects. There are plenty of new effects and monsters (without new art though), the most notable new effect being a mounted rocket launcher with guidable rockets. Once you get a hang of its weaknesses, the rockets should fly pretty smoothly. The map comes with an awesome, moody ogg track.

Design: Despite being a community project the map has a good degree of consistency. Design is average-above average most of the time with a few exceptions. You start from a rooftop from where the road takes you to countless urban areas, a hospital, a sewer, a subway and so on. The best has been saved for last: a big and beautiful harbor area very similar to that in Sin: Emergence. This area also leads to the end with a few not-too-difficult miniboss fights. If your rig is good then it's recommended that you play this with the HRP. (The lag is awful on a slow computer even without the HRP.) Even though some areas could have used more work there wasn't anything I'd have removed outright.

Conclusion: A fourty-minute journey during which you really feel like you're walking through a big part of a big city. 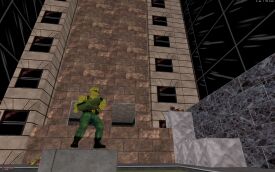 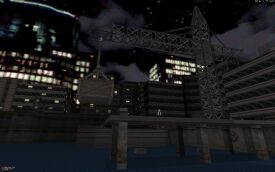