The Review: It's Christmas and Duke must fetch three presents for his girlfriend Lara (Croft?), then return for some bedroom action involving whips and handcuffs. Design-wise the map is quite a bit like Danny's previous works with plenty of clean texturing and low-rise buildings everywhere. Detailing is good throughout with a few minor eye-catching details there and there (particularly the mechanics of obtaining the gifts were well made), but again it all felt awfully similar to Danny's previous works; a bit more convention-breaking would do these maps a lot of good.
Duke's home is where the level begins and ends, but aside from that the map's structure is hard to figure out; there's no "center" as such and it's one of those maps where "everywhere" seems to lead to a new location, so you just go where the map takes you. The amount of decorative locked doors got a bit jarring as well; maybe some of these could have been used to increase the map's interconnectivity and thus improve the map's flow.
Interestingly there are two versions of the map available; one night-time and the other day-time. I played the night-time version first, then gave the day version a quick look, perhaps ultimately finding the night version slightly more atmospheric. Not a bad idea to give the player a choice when the author doesn't feel strongly either way. The map makes pretty good use of what the game's got to offer for making various Christmas decorations. Only the winter atmosphere occasionally felt a bit lacking and lifeless (an impression exacerbated, perhaps intentionally, by the gloomy soundtrack); maybe borrowing some snowfall code from another project could have spiced things up.
Combat-wise the map felt balanced, even if slightly easy. I could never get my hands on the Shrinker/Expander, and I missed 8 out of 9 secrets, but it never really felt like I was in acute need of supplies. Some of the indoor locations can get pretty cramped, but the author didn't fill such spaces with unfair enemy encounters.
At 30 minutes this is a pretty lengthy map, and you can probably sink another 10-15 minutes into it if you're on the lookout for any missing secrets. Oh, and the included music failed to play for whatever reason, so just type "music e2l8" in the console to get the intended music for the map.
All in all a good and enjoyable, even relaxing, map that could have used a clearer layout with less locked doors; it also wouldn't have hurt to put some more separation between this and the author's previous maps. 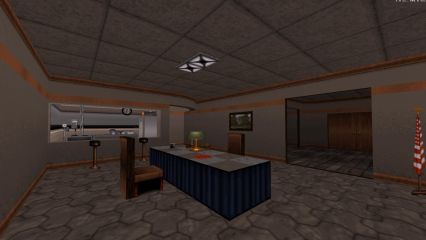 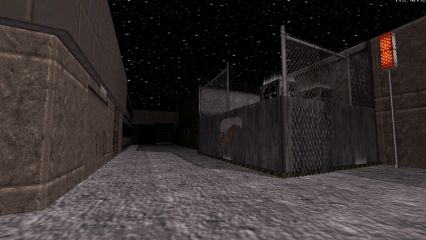