The Review: MRCK seems to have a hit a creative spree; his latest map, Poison Heart (named after a kickass song by The Ramones, which also plays in the background), is so filled with all kinds of creative little ideas all the way from the way effects are applied to the tiniest of details that you'll start to wonder how all of this could have been achieved in just a few months. Hell, he has even managed to make good use out of the abandoned "Scorpion Tank" design without the use of any new con coding. To be sure, this kind of creativity is a staple of MRCK's repertoire, but here it's been cranked up to an unprecedented degree. Not that it's always a success; there were a few times that I came across an object not certain of what it was supposed to represent, and occasionally things just look messy, but overall there are way more hits than misses littered all around the map.
While this is stuff you'd expect from MRCK, what surprised me was the sheer scale of the map. MRCK's maps have traditionally been somewhat flat with buildings maybe a few stories high. Here any past conventions are thrown out the window. Not only are the buildings some of the tallest you've come across in a Duke3D map so far, but there are also some epic details beyond the map's borders. The vertical axis isn't merely a visual gimmick; a lot of the map's navigation is vertical. This isn't a complete success, however; Duke is no Philippe Petit, so walking and jumping on thin sprites is not exhilarating, merely tedious. The scale can also be a bit overwhelming: after a ten-minute start, you find yourself in a major street area with a zillion different ways to go. Add to this the sheer amount of details and vertical stuff and you'll quickly start to develop symptoms of a sensory overload. There is also some potential for getting lost, but that is more a symptom of the scale rather any inherent design flaw. There were also times that, despite the map's scale, things started to feel claustrophobic in a true oldskool MRCK fashion. (Note: if you get stuck in the first building , be mindful of the fact that, apparently, Duke can crouch when he's shrunk even though there are no visual hints that this happens.)
The monster count remains balanced for the most part; it's certainly much better than in Siebenpolis, but there were a few annoyances. For example, why do protozoid eggs have to be so tiny as to make them hard to hit? There are also a few miniature-size Protector Drones that can only be killed with explosives (or with normal weapons if you simply disable autoaim). This is okay, but I'd prefer there not to be any other enemies around when these fuckers make an appearance. My only major problem with the monster count (and the entire map really) were the last 10 minutes or so when the map seemed to turn into a real clusterfuck (veterans of Operation Metro/Locker know exactly what I'm talking about): no amount of pestering will convince me that spamming monsters like this is good gameplay. The following boss battle will treat you with some amazing visuals, but the battle itself is pretty standard stuff (at least if you're well geared up by that point). However, for the most part combat is enjoyable, and you have to make good use out of every weapon in your inventory; in fact, occasionally the map seems to encourage the use of unconventional weapons.

Conclusion: Poison Heart is what happens when authors decide to "think bigger". Not only does it have everything MRCK's maps are known for (in both good and bad), but the author has also crawled out of his safe zone and gone for a sense of scale that can be downright intimidating. The increased scale has its drawbacks; the map may simply overwhelm from time to time, and it definitely has its fair share of annoyances, but you should be having a good time and just enjoy the constant exploration for most of its 40-minute duration. 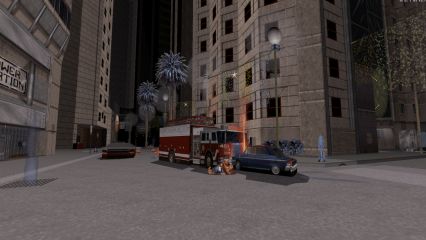 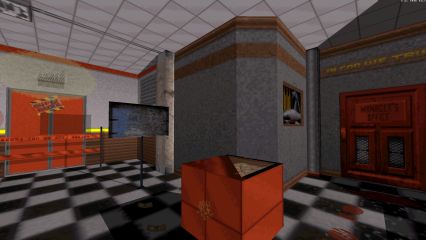