Description: Rusty's long stay in the Duke3D community has produced tons of material, including at least three distinct Alien mods, but so far only a tiny fraction of that material has seen the light of day. It is then a bit ironic that Rusty's sole usermap release took only six days to build. Of Pigs and Men is an open-ended desert/hi-tech map that requires both Attrition and Polymer (i.e., dynamic lighting).

Into it: Performance issues have been a major drag on Polymer maps but Of Pigs gave me a steady fps of around 30-50 most of the time, dropping to "unplayable" for only a few seconds a couple of times (I did get two crashes as well). Playing the first part of the map, the outdoor part, the use of Polymer seemed barely justifiable, since a well-positioned "sun" (a purely imaginary object that justifies a given level's lighting) might have produced better results with wide shadows cast by all the structures. The indoor parts, however, quickly reveal the benefits of dynamic lighting. Still, the map probably would have looked equally good with properly implemented vanilla lighting. The map comes with a new Palette file that changes the game's color balance, resulting in a greenish/blueish hue (see the shots below). It might seem a bit odd at first, and questionable, but it does give the map a nice unique look and especially the outdoor part, combined with Polymer lighting, looks much better with the new palette than without it. It's as if the new palette reinforces dynamic lighting in this part of the map while it'd be less noticeable with the old palette. The map's design was inspired by Borderlands, a game I haven't played but seen enough to notice some similarities. The design relies more on overall architecture than on miniscule details, the lack of which is barely noticeable with all the cool lighting and architecture around. (Do note that while it is highly not recommended, the map can be played without Polymer which is still tons better than not playing the map at all.)

DeeperThought's Attrition mod is basically a requirement as the map's gameplay balance would be dramatically off without it. The mod has not yet been reviewed here but the basic idea is that killing enemies raises the experience level of the gun used for killing. There are plenty of other additions as well such as modified enemy attributes, new powerups and so on. Of Pigs probably would have worked well as a vanilla map had it been designed for it but it's just perfect as an Attrition map (some vanilla fanatics would probably disagree), keeping it fresh. The open-ended nature of the map translates into a bunch of optional areas that you're probably gonna check out anyway before finding out where you're supposed to go. Gameplay has been carefully balanced so that you end up upgrading all of your weapons instead of being able to pick a favorite and stick with it. In terms of puzzles the map is pretty straightforward; the open-ended nature doesn't mean you're bound to get lost every few minutes. At one point you need to blow up three reactors, a nice change from all the typical button/key hunting going on in most maps. On top of all this, there's some custom content such as Liztroopers with hilarious pig heads.

Conclusion: Of Pigs and Men is a perfect example of a modern map. It successfully utilizes both graphics-enhancing and gameplay-enhancing addons while staying strictly Duke3D underneath. The map is well worth checking out even if you're unable to run Polymer. 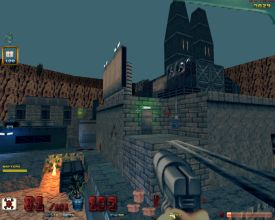 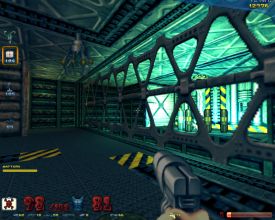