Description: GreatWasabi is on his way to build the first user-made SST TC episode. Two parts of the episode have already been released - this is the second one. A city has been overran by bugs and it's your job to escape.

Design: The city is similar to C3PO's "Mayday From Ceres" in terms of atmosphere. It's all quiet until the bugs arrive - a nice tension builder. In terms of design the level fails in many ways. Other than a few vehicles it doesn't really remind you of a futuristic city. The buildings look pretty basic although they're more than just square boxes. Street lighting is pretty well done but indoor lighting is too bright and sometimes light misses a source. Trimwork is quite horrible.

Gameplay: Gameplay is standard Duke-style key/button hunt which is luckily spiced up by some refreshing bug combats. There are some controllable guns which work pretty well and one of them is placed in a strategic key point. Of course you can avoid all this by just running away from the bugs - which you have to do a couple of times - a perfectly natural thing to do in SST TC levels. There is enough ammo & health but not if you decide to take down every bug.

Conclusion: Design could be better - especially in terms of lighting & trimwork. But the gameplay saves - and it doesn't really look that bad. Download SST TC here. 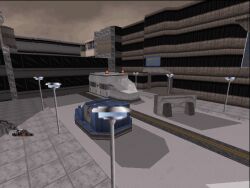 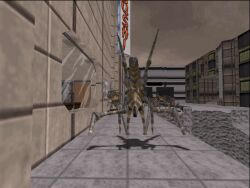