Description: The third part of Munasta episode is about Duke being a big bad thief. Check previous parts here and here.

Design: Munasta 3 is a tad worse than the previous part, Munasta 2. Design-wise the levels are quite similar but the previous part had a bit stronger gameplay. There's some great architecture, such as the big hall with some recon cars and the disco/bar area (small but nice) but the rest of the level looks quite average. Texturing is dull and there are numerous texture alignment bugs.

Gameplay: Running through the level all the way to the nukebutton is possible within thirty seconds (assuming you know where it is). There's no need to find any keys or items. This is a bit strange way to build levels since it's too likely that some players will just skip (or they won't even notice) 50% of the map because they're not forced to explore. Monster/ammo ratio is average, I got a bit frustrated a few times. Fighting your way to the space ship (an odd looking one) is cool but the warehouse seems a bit cramped (unless you found the jetpack).

Conclusion: An average space level. The level's unlinear flow causes some problems and the design side could use some more work. 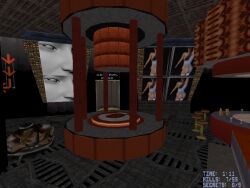 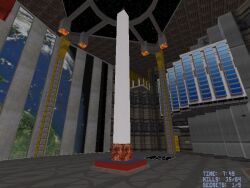