Description: It took some time, but the sequel to Munasta is finally out. The second part is a medium size space station where Duke has to complete three objectives in order to save mankind from the scum of the universe.

Design: As said - the level is based on a bunch of objectives. This leaves us with a bit worse design than what we have gotten used to. Excluding the first area, most of the walls are without any details or decorations. Trimming could be better and I wouldn't mind seeing a bit more variety in colors - now it's just gray or brown (palette 7 has been used often). The design still remains above average since there's nothing severely wrong with it and some of the areas look pretty good.

Gameplay: You're supposed to play all three Munasta levels at once, which is the way it should be reviewed too but hey - life isn't always fair. Having a bunch of objectives instead of the always oh-so-typical keys and buttons (there's a lot of them too) is always refreshing. However, I almost missed the second part, where you have to manually launch some nukes (you can continue the level without ever launching them). It's a cool scene so don't miss it.

Conclusion: The level certainly plays a bit better than your average usermap. Its architecture just could use a bit more detailing. 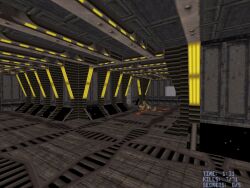 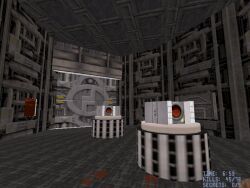