Design: The level mostly impresses me with its texturing & lightning. The level is well detailed but there definitely are areas which could use more work. There are several interesting areas such as the control room with automatic guns & some button 'puzzles'. The space station's "inner circle" (unreachable) looks pretty good.

Textures: Not-so-typical texturing. This one doesn't have the same problem with textures as Phoenix's previous 'Taamalus' had. Textures are mostly well picked and there's enough trimwork to keep you satisfied looking around.

Gameplay: First of all don't forget to pick up your shotgun in the beginning. You might miss the corridor from which you can get it. There are lots of buttons & keys and you'll be searching a bit. I missed one crane-related puzzle at first which led to being completely lost. Not as complex as Taamalus and not as unlinear but still not the simpliest level out there. Enemy/ammo balance is pretty good. Fat Commander appears in a small corridor so watch out for him.

Innovations: Nothing majorly new. There's one "floor-door" which is not so often used effect.

Conclusion: Well designed space level with some not-so-easy puzzles & interesting locations. Give it a try. 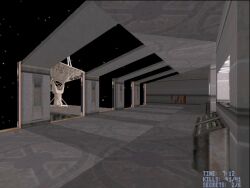 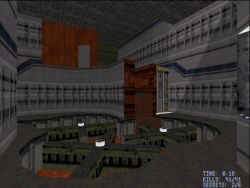