The Review: A mining corporation has come across an alien artifact that could be used for who-knows-what. A race between the aliens and Duke to harness the power of the artifact ensues. As far as hi-tech bases go, this is as sprawling as it gets. The interiors of the base open up bit by bit, and the base has a great sense of scale: keeping things detailed while increasing the scale is always a challenge and this map demonstrates that it's more than well up to the task with its extensive user of spritework (for some pseudo-3D effects) and big machinery. The map is lengthy but doesn't end up repeating itself (aside from its repetitive and loud soundtrack); there's everything from a grand lobby to an underground sewer, but texturing and trimwork could have been a bit more consistent across these separate bits. The almost uniformly bright light level of the main lobby was also kinda jarring. Moving around the map doesn't get repetitive either as you get to use the jetpack, the scubagear and bounce between the map's two halves with a two-way train (which has an epic introduction). The monster count is very high, but this is one of those maps where a high monster count doesn't really seem to translate into increased difficulty. In fact, health and ammo are so abundant (looking around and searching every corner helps a lot) and there's so much space to move around that you should never struggle with health or feel like you're being pushed into a corner. (Even the big battle at the very start consists mostly of mowing down weak Troopers with the pistol.) The author also seems to have been mindful not to populate the map with too many hitscan Enforcers, and a few well-placed Protector Drones and Commanders also get to make an appearance just as you're about to grow tired of shooting nothing but Troopers and Pig Cops. The downside to this incessant action is that you find yourself often just holding down the fire key without feeling challenged. 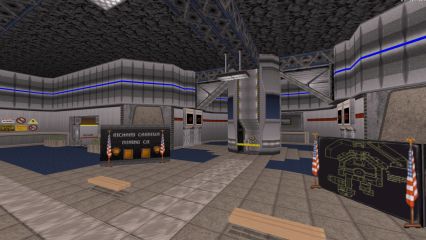 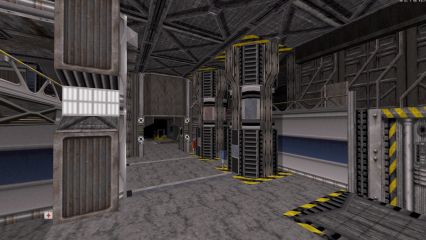