Description: Another gem by Billy Boy, the most talented Duke mapper. Dukem Memorial Hospital is actually even older than Lighthouse (Biglight) but it's still a well designed map full of Billyish puzzles.
Note: The version I played came with Lighthouse. I'm not sure if the uploaded version is exactly the same but I'm quite sure it's 99% the same.

Design: As with Biglight, some (merely a fraction) areas look noobish, with crappy textures and no details (except excellent lighting) but other areas look well above average (see all outdoor areas for example). Again, it's not that Billy Boy can't design highly detailed levels (after all - this level is MOSTLY well designed) - it's just that Billy Boy's maps eat so much resources that he's forced to leave some areas empty.
But anyways. As you may have guessed, Duke has to clear a hospital site off enemies. There's plenty of stuff you'd expect to find from a hospital but also quite a lot of weird stuff. However, Memorial is still a lot more realistic than Biglight (the strangest lighthouse ever!). I especially liked the way all outdoor areas were designed, particularly the hospital exteriors.

Gameplay: As with all Billy Boy's maps, you either love, hate or tolerate the gameplay in Memorial. You're going to be pushing tons of buttons (I'd have left a few of those multi-button puzzles out), searching keys and trying to figure out where to go next. It's not as hard as Lighthouse, Bedrone or Clearwater (I completed these maps either with help from someone or with the help of Quakis's walkthroughs). There are signs that indicate where you should go next so just pay attention and don't give up. There's a good bunch of special effects and neat new innovations that should keep you happy. The level took me a bit over 70 minutes.

Conclusion: It's big, it's challenging and, in the end, it's rewarding.

Oh and btw, Dukem Memorial Hospital was released a day before MSDN went online on 21st of April, 1999. 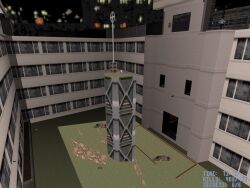 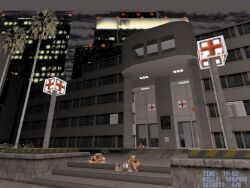