Description: This one's a sequel to 'Jurassic Park - Chaos Theory' which was released only a few months ago. The author has taken a leap forward with this new Jurassic Park themed level.

Design: The level is based on Jurassic Park theme which means a lot of jungles, caves & hi-tech areas. The level manages to combine all these factors pretty well and make it a working action-packed adventure level. The level is quite big and full of monsters. The nature looks good but it could look better - some parts have developed since the previous JP level. Outdoor areas could still use a lot more shadows and the surface should be less flat. Some of the canyon-design looks good - like in the beginning and at some points the jungle looks very good when it's thick with plants & stuff. The first indoor areas are well shaded & designed but when you get closer the end some of the indoor areas start lacking shadows.

Textures: This one has a bunch of sunny textures plus some new JP themed sprites. Texture usage is mostly good although some more decorations would definitely spice up the level a bit. The quality of the new sprites ain't that good but I guess it's better than without them (at least there's something which indicates to Jurassic Park).

Gameplay: There are tons of monsters and maybe a bit too much of ammo. While outside you'll start wondering "who's going to need all that shotgun ammo?". It's not too easy however - looking for health is vital since I'm sure you'll get hurt badly a few times. There's also a new midi from 'Jurassic Park' game for Sega MegaDrive - a true classic to my heart at least.

Innovations: Nothing really - there aren't many JP levels so it definitely feels fresh - but still a lot like the previous level. I like the way author has designed some 3d-dino corpses and I just love those Raptor heads looking at you from the bushes - "clever girl".

Conclusion: Quite big outdoor/hi-tech level with lots of monsters. Surely worth your time although the gameplay is very basic and the level's design could be better at times. 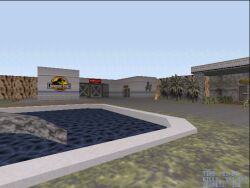 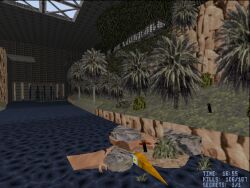