The first CBP to be made for Jonof's Port/EDuke32, the map is gigantic in size, almost a meg with plenty of action to last for 20-30 minutes. Eight legendary creatures worked on this day and night, sacrificing their "social lives" for your entertainment. JFCBP is most likely the best thing to ever happen in anyone's life. Until this very moment your life has been futile but now - I declare, it has a purpose. 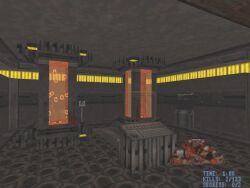 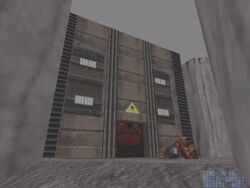 The theme is relatively consistent although there never seemed to be any specific plans on what should or should not be done. A few things stand out and the hi-tech/snow theme breaks near the end but not too unfittingly. Transitions between parts are somewhat easy to recognize - a chance for you to spot your favorite builder's style! All available walls were used so the level has got an amazing amount of details - pretty much in every part. While the level relies heavily on hi-tech stuff there's a bit of variation - a rocky cave area, a bar with an aquarium and a street area that wraps it all up. And of course the hi-tech parts are all different in their style - more or less.

The level has nearly 200 enemies that should offer you a nice challenge. It never gets too challenging and you're likely to get lost only once - in the cave part. So the gameplay never gets beyond the standard level of keys & monsters - a logical outcome when you have many builders building the same map under lax rules.

Conclusion: A fine map by some of the best builders. It's big but not as big as you might think - it's big because of the amount of details but should take you no more than 20-30 minutes. 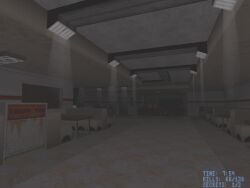 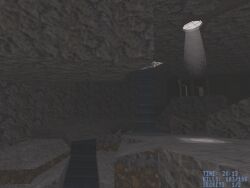