Design: 'JAC' is extremely detailed and full of spritework. Everywhere you go you'll see massive amounts of details & sprites. Go to the disco and you'll see what I mean - The roof is full of neat lights and the floor has been filled with spritework - chairs & tables. The streets are covered with snow & Christmas lights (very pretty). There are some invisible walls which could have been fixed quite easily - but they weren't that bad since there were at least some barriers which could block the player in a real situation. The buildings outside look very good with tons of details. There's also a light-house & sea view in the end - very nice.

Gameplay: The level is not as big as Taivo's previous levels but it's still big enough to be entertaining. There were a few annoying scenes - It took me some time to find that switch from the disco (apparently I had tried to push the counter but it didn't work at first) and the machine which starts the explosion (near the library) comes out of the ground too slowly (& is a bit unrealistic). Monster/ammo balance was pretty good (make sure to have a shotgun before exiting the house in the beginning) - There were some tough fights thanks to tight corridors.

Innovations: A Christmas tree? Njah - In case you don't remember Dukebert made one already back in -98 (check 'X-Mas 98'). But surely Taivo has his own way to build things - that's why this level feels pretty fresh. 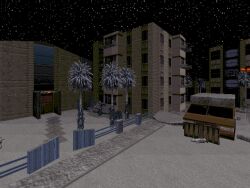 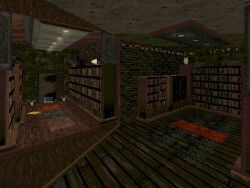