Description: Thedutchjelle, who recently released Vault of Death and Deep Sea Rising, is back with another map, Industrial Devolution. Duke must clear an industrial site that has been built on an island.

Design: The industrial feel owes a lot to lighting and texturing. Lighting is effective and texturing sticks with one theme, giving the map a nice industrial look. However, like Deep Sea Rising, this one too is awfully cramped. I'd also have liked to see more details since now it seems that the crampedness is the only thing that prevents some of the areas from looking empty. There's some well-used spritework (mostly bridges) around the map.

Gameplay: The map has taken a step toward unlinearity in terms of gameplay. You have several routes to choose from, especially near the beginning. If you're planning on playing the map twice this may provide two quite different gameplay experiences. The level is fairly easy to navigate so you probably won't get lost. There's a stupid button puzzle near the end but it's just stupid - not annoying or difficult. Also, I'd have liked to get my hands on a bit more health.

Conclusion: My suggestion is less crampedness and more details. However, the overall look is well above average and the level is entertaining, mostly thanks to its unlinear gameplay. 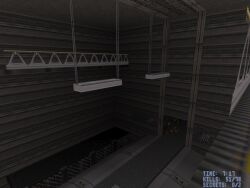 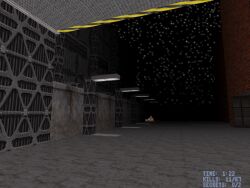