The Review: This is of a rare breed, a map designed for v1.3d, that is, the three-episode version of Duke Nukem 3D (but keep in mind that these maps work just fine in the Atomic Edition so long as they don't have any new code). This is explained by the fact that work on the map began more than 20 years ago. This isn't the authors first published map either, as he released quite a few maps in the late '90s, including CrashTV. (You can find his other maps, mentioned in the readme, in the Dukeworld archives.)
In any case, the map centers around a water park. The street area where the map starts is pretty hectic as soon as the map loads; you're getting shot at from all angles by troopers and several hitscan enemies that seem to be dropping in out of nowhere, and you're forced to look for supplies amidst all the action. Once you get past this initial hump, the going gets more manageable, but exploration is still encouraged to obtain additional supplies. This is a tough map, and some of your success is dictated by where you end up and in what order. For example, on my first playthrough I visited an optional but rather important building only during the final combat phase, while on my second playthrough I went there earlier and found the map easier (although still tough). Cover isn't always available, so the map calls for quick reflexes and being prepared. The ending presents you with a choice between a boss and a Nukebutton, and I liked the fact that neither option is a walk in the park.
That the map had its genesis more than 20 years ago doesn't come off as a surprise, for detailing, texturing and trimming aren't quite as "sophisticated" as in modern maps, and they have a bit of that late '90s sloppiness to them. Still, the map has plenty of nice little details, lighting remains quite strong throughout and the author handles bigger areas very well. The map seems to like dark areas too, for quite a few indoor areas rely on you using the NVG and finding light switches; but these aren't always available, so some frustration cannot be avoided.

Conclusion: A time capsule in a way, HappyLand Water Park suffers from a few design-related snags that were common in the late '90s, but it still holds surprisingly strong against "competition" from modern mapping. The map's tough combat may be too much for some, but at least I found the challenge refreshing - even if sometimes it felt like I was doing little else but holding down the fire key. 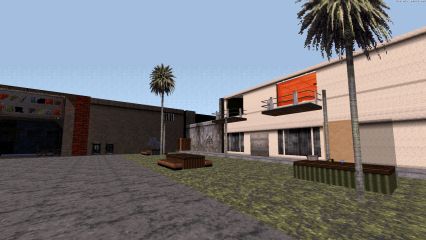 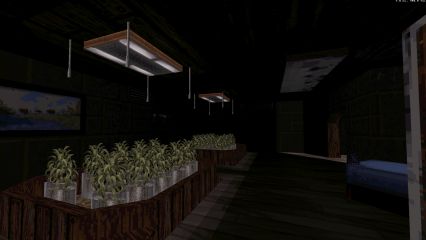