Description: Aliens have once again stepped on Duke's toes. A nameless city has been taken over by the aliens and Duke's job is to make some room for a bunch of EDF hippies. A detailed and medium-sized city level from the Guru.

Design: It's undoubtedly Fakir - The trimwork and texturing is so rich that no one else could do it the way he does. However it's not even nearly as BobSPish as Fakir's first single-player MSDN entry - FbSp001. Lighting/shadow-work is similar to original Duke3D levels but clearly better and more often used. The streets are well textured with realistic decorations.

Textures: As said this level is particularly well textured & trimmed. Each door frame/surrounding has been done carefully and the texture choices for different locations have been well picked & fit with the overall theme. The white lines on the streets have been used the way they should have - which is something you rarely see in Duke3D levels. The level comes with a new skybox but it's not automatically installed - you have to do it manually (instructions have been included). It's better than the non-skybox sky but the significance is small.

Gameplay: With all the torn-up buildings, fires and patrolling spaceships the level has a certain feel of an invasion. It really adds to the atmosphere. The monster/weapon balance is good and skill settings are included - however with S2 & S3 the gameplay gets a bit boring once you enter the streets. It feels as if the monsters never stop coming. However taking these baddies down shouldn't be a problem since enough medipacks & bullets have been included - just that it really starts to get repetitive.

Innovations: Nothing new really but the patrolling alien crafts and the new skybox add a bit extra originality. 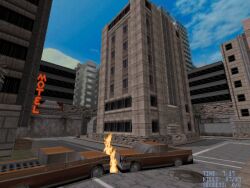 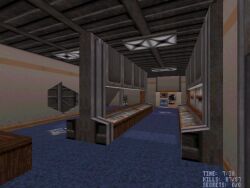