Description: This is the "as close to DNF as we will ever get" mod, the one that utilizes Polymer to its fullest and in the process makes your computer cry. The pack requires the HRP and DukePlus. (You should also get this patch unless you want to get stuck.) If your computer cannot run Polymer (i.e., Duke3D with dynamic lighting), you cannot run this map. You have been warned.

Into it: So far Eternity consists of two levels, one of which is a modified and heavily cut version of Tribute to Action II. (The original is so big that it probably would have felt out of place and stretched as part of Eternity had it not been cut in half.) Of course, with Polymer it looks much better. In fact, both levels look absolutely stunning! Lighting has been implemented with care and purpose, not sloppiness just for the sake of showing off. There are fires, explosions and flickering lights that further bring the environment alive. Combine this with a bunch of new textures and you end up thinking how incredibly far Duke3D has come now that its graphical look competes with that of games such as Half-Life 2 and Doom 3. 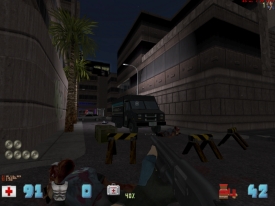 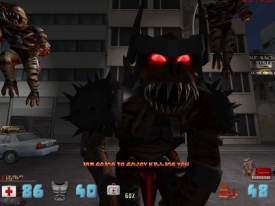 The obvious downside of these graphical fireworks is that all that lighting combined with hi-res textures makes your computer bleed. The fps counter was giving me red all the time (my computer specs are available here) and two outdoor areas in the second level caused so much mouse lag that the best way to move was to face the ground or a wall and let your friends, who pop in every now and then, deal with enemies. Obviously, this is not the way the level is meant to be played which is why the pack hasn't been given a score.

Gameplay is as action-filled as it gets. As mentioned, "Dukebots" assist you from time to time and there are cutscenes that help establish a plot or, rather, give the map a more cinematic feel. Two tracks from the great Quake 2 make an appearance, fitting right in with their "rock on" beat. There are many urban places to visit, urban locations being DanM's area of expertise. One particular nightclub ought to make a DNF fan drool.

Conclusion: Eternity is in many ways the ultimate Duke Nukem experience with its never-ending action, babes and urban environments. But what makes it truly stand out is its amazing graphics. Unfortunately, it's going to take a while longer until most of us get to experience Eternity the way it's meant to be experienced: without your fps counter screaming red the whole time. 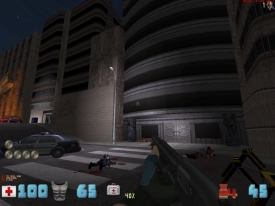 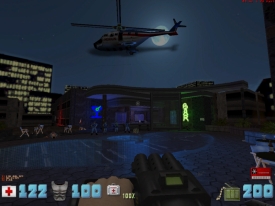 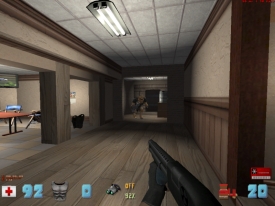 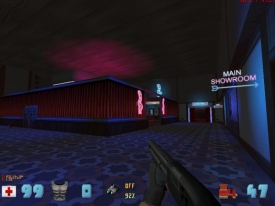